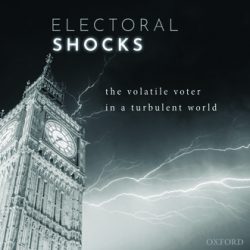 ‘Electoral Shocks: The Volatile Voter in a Turbulent World‘ is now available free of charge to everyone under an Open Access agreement with Oxford University Press, funded by the University of Manchester. You can download the full text as a PDF here. We hope this will be useful for teaching purposes and for people working away from University libraries.

It follows in the tradition of British Election Study books, providing a comprehensive account of specific election outcomes—the General Elections of 2015 and 2017—and a more general and novel approach to understanding electoral change.

The focus on electoral shocks offers an overarching explanation for the volatility in British elections, alongside the long-term trends that have led us to this point. It offers a way to understand the rise and fall of the UK Independence Party, Labour’s disappointing 2015 performance and its later unexpected gains, the collapse in support for the Liberal Democrats, the dramatic gains of the Scottish National Party in 2015, and the continuing period of tumultuous politics that has followed the EU referendum and the General Election of 2017. It provides a new way of understanding electoral choice in Britain, and beyond.