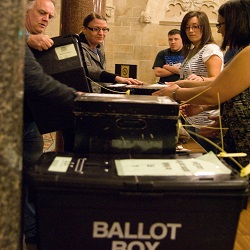 This week  BES Co-Director Professor Ed Fieldhouse spoke to an ESRC sponsored ‘Chalk and Talk’  event at the Social Market Foundation, London, in which he explored the decline of our two party system. Electoral theory expects proportional systems to enhance smaller party voting and majoritarian electoral systems to reduce it. Yet under Britian’s First Past The Post system, 21.1% of voters chose UKIP, the SNP and The Greens. In that context, he looked at: