None of the above: the role of non-voters in General Election 2015 , by James Kirkup 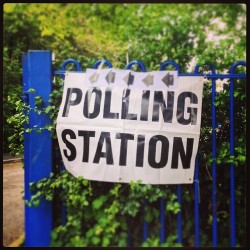 Where does a party find extra votes? It’s one of those simple questions about politics and elections that sadly doesn’t have a simple answer.

One place to find new supporters is among the backers of other parties. I wrote something about that here. In summary, neither Conservatives nor Labour is doing a very good job of persuading the other side’s people to switch sides. Their performance in winning over the supporters of smaller parties is mixed.

Clearly in a close election, success or failure in winning the backing of the Did Not Votes (DNVs) could be very important. So it’s worth a look at how the parties have done here in the past, and how they might do this time.

Before we get to the numbers, I should point out a couple of things. First, data on the voting intentions or actual votes of the Did Note Vote population is pretty scarce. Commercial pollsters tend not to do cross-tabs on them because they’re hard to pin down. The wonderful British Election Study does have some numbers, but of course, they’re self-reported: we have to trust people to report accurately their own actions.

That said, there are some figures from the BES that still deserve a closer look.

Chris Hanretty of UEA has kindly crunched the numbers here. I remain very grateful to him.

From those figures, we can say that in 2010, the Conservatives did well at winning over former non-voters – very well, in fact. David Cameron took 36 per cent of the overall vote in 2010, but he won the support of 39 per cent of people who had not voted in 2005. It’s an inference, but that suggests the Conservatives did a good job of energising and inspiring those who had not previously engaged with politics.

Labour in 2010, by contrast, underperformed. The party took 29 per cent of the national vote, but barely 20 per cent of the Did Not Vote group. Gordon Brown was evidently not as inspiring a prospect as Mr Cameron.

The Lib Dems did OK. Their national vote share was 23 per cent. Their share of the Did Not Vote group was 19 per cent.

Ukip took 4.37 per cent of the Did Not Vote group, slightly above their national vote share of 3.1 per cent.

Next we can look at the people who did not vote in 2010. What might they do in 2015?
To repeat, data is scarce, but there are some BES figures. The figures cover a sample of 4,530 people who were surveyed in May and June this year (Wave 2 data, in BES terms.)

Kathryn Simpson of the BES has heroically overcome my statistical limitations and sifted the figures in a way that I can understand. I am indebted to her too.

From the figures, we can say that the Conservatives aren’t doing so well in picking up new voters. Only 16.5 per cent of those who did not vote in 2010 are now intending to vote for the party next year.

Labour is doing a bit better with 21.3 per cent of Did Not Votes. But that’s still broadly in line with their 2010 performance.

The Lib Dem disaster continues here too. Only 4 per cent of those who did not vote in 2010 now say they will back the Lib Dems next year. That’s surely vivid evidence that the Lib Dem ability to channel disinterest and disaffection with politics has waned badly.

Ukip has gone in the opposite direction. 11.4 per cent of people who did not vote in 2010 now say they will cast a ballot for Ukip next year – another scrap of evidence suggesting Ukip is drawing previously disengaged people into politics.

Two other sub-groups deserve a mention. 18.1 per cent of people who didn’t vote in 2010 say they won’t vote next year either. And another 18.7 per cent say they haven’t decided.

How have things changed?

I’ve squished all the numbers from Chris and Kathryn into one chart here, which hopefully demonstrates the shifts described above.

What does all this mean?

Well, insofar as we can draw firm conclusions from the limited data, it doesn’t look great for either the Conservatives or Labour.
Both parties need to find a lot of new votes to add to their 2010 totals if they are going to get into Commons majority territory. When it comes to the competition for the Did Note Votes, each party should be aiming to do significantly better than the other. But these figures suggest that the two big parties are on course to scoop roughly similar numbers of votes out of this particular pool: another arrow pointing towards a stalemate between Conservatives and Labour.
As for the smaller party, it’s natural to wonder if Ukip’s success among the Did Not Votes is coming at least partly at the expense of the Lib Dems. But that really is nothing more than an inference.