BES and the EU referendum result on ITV 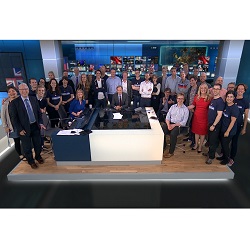 The British Election Study has served the social science community since 1964, and will continue to provide a public resource for understanding the political upheaval our country is experiencing. On Thursday night, using the British Election Study, we called the result of the EU referendum on ITV. We were the first broadcaster to announce the result to the nation, and to the watching world.

Using the most recent BES data, BES research fellow Chris Prosser (University of Manchester), built a forecast of the EU referendum result, in collaboration with Colin Rallings (Plymouth University’s Election Centre and ITV News Elections Analyst) and BES Co-Director Jane Green (University of Manchester). Information was added to the 30,000 person BES dataset on how each EU referendum counting area in Great Britain voted in the 2015 general election (calculations provided by The Elections Centre), how each Local Authority voted in the 2014 European Parliament elections, and census data on key demographics. With this data we estimated two models before the night using Multilevel Modelling with Post-stratification (MRP). First we estimated a forecast distribution of leave and remain votes for each counting area. Second, using the BES vote validation data combined with our respondents’ reported likelihood of voting in the referendum, we estimated the likely level of turnout in each counting area.

These forecasts provided a ranking of how each counting area was expected to vote, from most likely to vote remain to most likely to vote leave. Our leave and remain forecast underpinned the visual depiction of the results on ITV. By adjusting the forecast to give an overall 50:50 outcome it also gave us a benchmark to analyse and interpret the results as they came in. The results pointed to a leave victory from the start of the night. Newcastle and Sunderland both voted leave in greater proportions than we would have expected in the event of a tie. Scotland delivered narrower remain votes and on lower turnouts than later leave votes in Wales and in England. As leave votes were declared in areas we expected to vote remain, the direction of travel was unstoppable – even by stronger remain votes in London (on turnouts again lower than the majority in the rest of England). All of this was made clear visually on 3D ITV graphics using the BES data and our forecast.

As the results came in we compared them with our original forecast and with data on 2014 European Parliament results and demographics, and used this to update our forecast model. At 3.13am we went public with our first forecast, a 75% probability that leave would win – the first concrete televised prediction of the result. That probability became 80%, then 85% and by 4.35am, our model – using the British Election Study – enabled us to declare on ITV that Britain had voted to leave the European Union. In addition to the BES forecast on ITV, BES data was used to illustrate a variety of reasons why people were voting for leave or remain.

The BES benefited from additional funding through the UK in a Changing Europe initiative, funded by the ESRC. This funding – and our existing funding – meant we could add to our 30,000 strong online BES panel study (spanning February 2014 to June 2015 and which was already due to go into the field in May 2016), a pre-EU referendum wave (fieldwork 14th April- 4th May 2016), a daily rolling campaign wave (8th May – 22nd June 2016) and a post-EU referendum wave (24th June onwards). The pre-EU wave will be released very shortly, followed by the daily campaign data, and then – as soon as possible – the post-EU referendum wave. All of these data will be added, in time, to the BES data playground, meaning anyone can analyse these data without the need for statistical software.