BES news round up 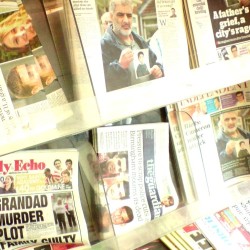 This year, academic colleagues from around the country have been using British Election Study data to inform public opinion – and in the process have been hitting the news headlines. Professors Jane Green, Geoff Evans, Ed Fieldhouse and Cees Van Der Eijk of the BES Scientific Leadership Team have appeared in the media providing opportunities for BES to get behind the political headlines.

Our highlights include a front page story timed with our successful event on 9 December in the Daily Telegraph entitled Millions of Tory voters to pick Ukip and a Page 2 story in the Sun on Sunday on the same topic – but there was major coverage in many of the national newspapers. That weekend the distinguished writers Andrew Rawnsley and Matthew Parris both praised BES in their respective columns. Following the publication of the Guardian’s Page 4 story, we were amazed to see 246 comments by 7am.

Another highlight was when BES Co-Director Professor Jane Green appeared as a commentator on the BBC’s election special last May with David Dimbleby.

We’ve also been picked up in the Times Red Box, the New Statesman’s popular blog called May2015.com as well as James Kirkup’s blogs in the Daily Telegraph. We’ve appeared on BBC Breakfast, the World at One, BBC Radio Four’s Westminster Hour, Six O’Clock News and the BBC News Channel.

A BES study into Ukip in May was widely reported in the media, including a page 2 story in the Daily Express, and further coverage in the Telegraph, Financial Times and BBC Radio Four and Two.

BES research findings were widely covered during the Scottish Referendum campaign, appearing in most national newspapers North and south of the border as well the major broadcasters.

Our new film, Understanding British Democracy has been getting great reviews since it was launched on YouTube on 9 December.  We’ve already had over 1,250 views – so we’re pleased about that too.

Here is an edited list of some of our highlights:

Also appeared in , often in under the headline Undecided ‘more likely to vote Yes’ , the Daily Record ,Daily Star, Daily Express, Daily Mail and The Times,

THE IMPACT OF THE STUDENT VOTE, NOVEMBER

OTHER FINDINGS FROM BES DATA