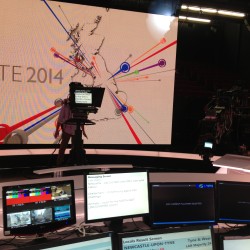 With voting in both the Local and European Elections taking place on Thursday 22nd May, Professor Jane Green of the British Election Study team provided up to date analysis of the elections for BBC Breakfast and the Vote 2014 election special program (BBC1 & BBC2) with David Dimbleby on Friday 23rd May. Jane was part of the BBC Vote 2014 panel with Patrick O’Flynn, Director of Communications for UKIP, Eric Pickles MP Communities Secretary for Conservative Party and Michael Dugher MP, Labour Party Vice-Chair.     Jane disseminated the results of British Election Study data on air. She highlighted, “It is important to remember that turnout in these elections [local and European] is not soaring, it’s not particularly high, it’s looking normal for local and European elections. That means that large proportions of people are not voting and are not having their say. We [the British Election Study Team] asked as part of the British Election Study whether “politicians don’t care what people like them think” with 65% of people in agreement with this statement”. Jane demonstrated that there is an opportunity for all of the political parties to address this political disengagement and political apathy among voters. Jane’s full analysis can be found on BBC iPlayer for another couple of days: http://www.bbc.co.uk/iplayer/episode/b044lzxz/vote-2014-4-local-part-4

Further analysis of UKIP by the British Election Study was featured in the Financial Times and the New Scientist . Jane’s analysis of the local elections for the Conservatives, Labour and Liberal Democrats was featured on the political blog, politics.co.uk .