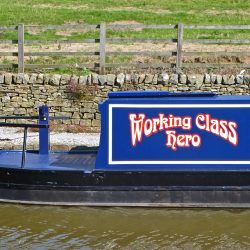 Occupational class was once the fundamental structure behind the British party system, with the vast majority of the working class supporting Labour and the vast majority of the middle class supporting the Conservatives. This link frayed in the 2000s under the New Labour government and today, the relationship between class and voting is more contingent and more volatile. Because this relationship is now so fluid it is more important than ever to have up to date measures of class for researchers to use.

This is tricky because measuring occupational class is a time-consuming endeavour which involves collecting a respondent’s occupation (coded by research assistants into hundreds of possible categories) and then cross-referencing this code with the respondent’s supervisory responsibilities to obtain a measure of class. For the face-to-face post-election survey this does not pose a huge problem and largely proceeds as it has since the 1960s. However, the BES internet panels with around 30,000 respondents per wave and 16 waves poses a greater challenge for keeping our measures of occupational class up to date.

Until now we have largely replicated the face-to-face procedures on the Internet panel. The problem with occupational class is that to measure it accurately you have to first ascertain the respondent’s exact occupation and then feed this through a series of lookup tables to code them into a class group. The class groupings are technical and not sufficiently understandable to respondents for them to easily self-categorise. In the panel we have previously coded the respondent’s exact occupation by asking them to give open ended answers to the following questions:

Research assistants then spend hundreds or thousands of hours coding the open-ended responses to these questions into the ONS’s SOC 2010 schema. This has serious downsides in terms of time, money and inevitable human errors when repeating a task hundreds of thousands of times.

For wave 16, we planned to expand the sample to 38,000 in order to allow for a parallel panel refresh described in more detail here. This would have further increased the delay in coding class if we used the standard method.

Instead we have introduced a new approach based on partial matching of respondents to the ONS’s list of 55,000 occupation titles which map onto the SOC2010 occupational schema. For instance here are the automatches an accountant would see as they started typing their occupation into the box: 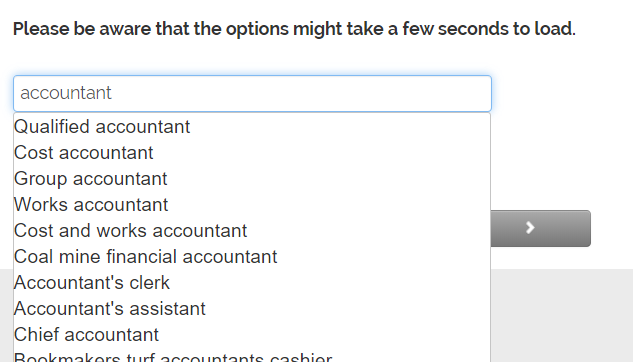 Another example for an electrical engineer is shown below:

To see a test version of this click here. Note that this test link is relatively slow (and is not implemented in exactly the same way as what respondents saw) but gives an idea of how specific the occupations can be.

Because these occupations are pre-coded into SOC 2010 codes, this approach allows us to deliver class coding with the first release of each wave of the BES where class is measured.

To make sure that these codings are working correctly, we ask respondents: “How well do you think that job you chose in the previous question describes what you do?”, with answers: Very well/Fairly well/Neither well nor badly/Fairly badly/Very badly (occCheckW16). We remove all occupation codings for respondents who don’t answer very well or fairly well and ask them the old version of the occupation question. 83% of respondents answered that the occupation describes their job fairly or very well, with only 5% saying it described their occupation fairly or very badly. The coded open-ended responses of these respondents will be released in future versions of the BES once they have been coded.

So after all of that, how did class relate to voting intention in wave 16 right after the European Parliament elections. In the immediate aftermath of the European Parliament elections, the Liberal Democrats and Brexit Party shot to the top of many polls. While the polls now look very different, this gives us a snapshot of one possible scenario for future elections, where the major parties lose their primacy due to a lack of credibility on the Brexit issue. Excluding non-voters and don’t knows the Westminster vote intention in wave 16 was Brexit Party 25%, Liberal Democrats 20%, Labour 20% and Conservatives 17%.

The following chart shows the proportion of each class who stated that they would vote for each party at the time of wave 16 (again excluding don’t knows and would not vote). There are clear patterns in support across social classes but none which correspond to the simple working versus middle class division that characterised politics before Tony Blair.

The Conservatives lose support among all classes except for the large employers and higher managers class who have always been the most supportive of the Conservatives. Labour’s support holds up best among the working class (routine and semi-routine) as well as the intermediate and lower professional categories.

The Liberal Democrats’ support is strongest among the highly educated (and generally socially liberal) higher professional class, with much less support among other groups, particularly the working class.

The Brexit party’s support, by contrast, is weakest among the higher professionals, but is reasonably high across a wide range of classes. As I found for UKIP in work with Geoffrey Evans, the Brexit party is most popular among the small employer and lower supervisory classes, rather than the traditional working class. The higher support for the Brexit party among these classes is still substantial even accounting for age and education and even left-right and liberal-authoritarian values. 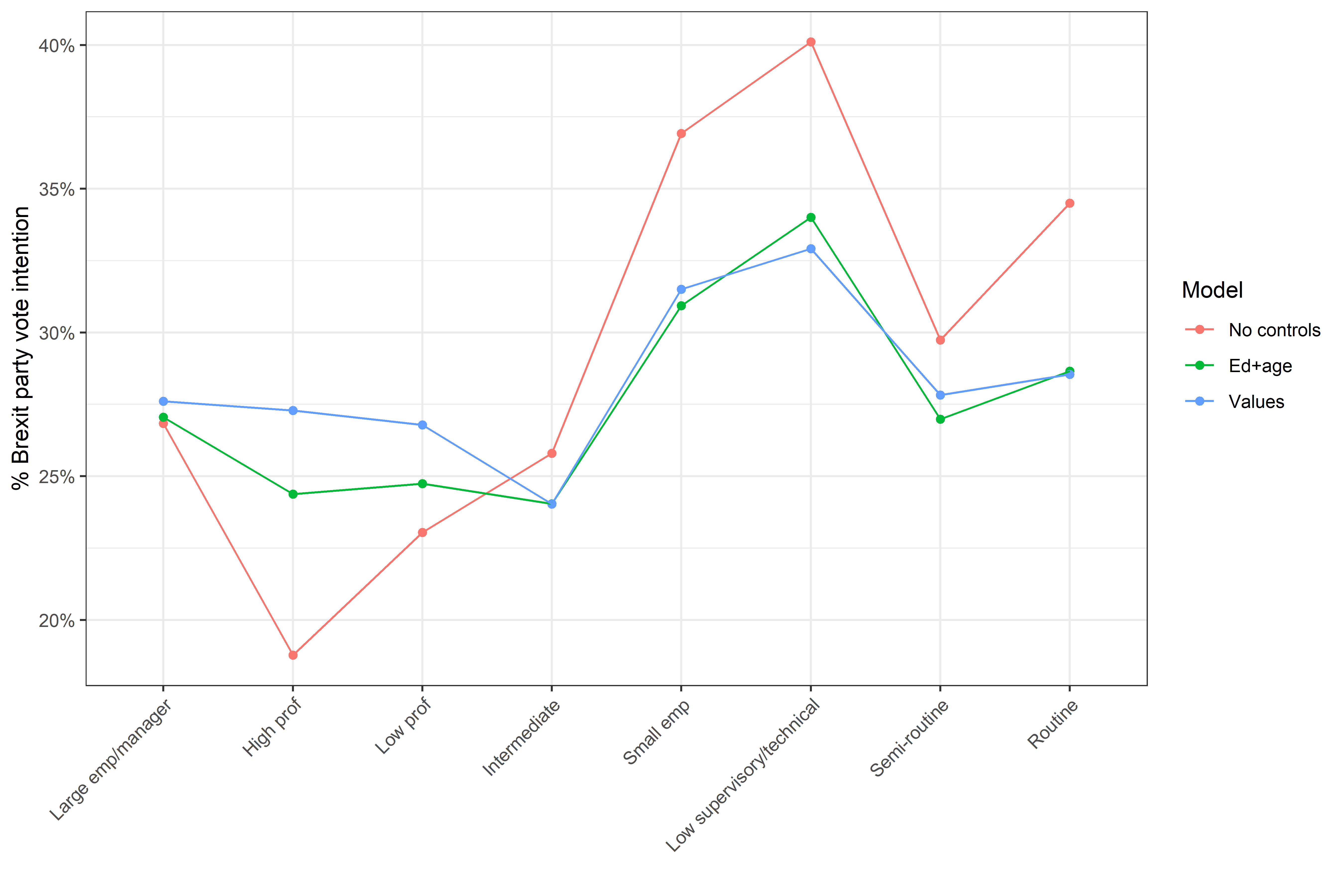