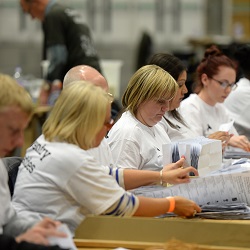 The most important change to note is that the size of the electorate (which was previously based on pre-election reporting and estimates) has changed for most constituencies. Details of these and other changes to the data from previously released versions can be found here: BES 2015 General Election results file v2.0 change log

As with previous versions, the results file includes contextual information at the constituency level:

Note that because the Scottish census is carried out separate to the census in England and Wales not all census information is available for Scottish constituencies.

The results file can easily be merged with our survey data by matching observations on the ‘pano’ (Press Association Constituency ID) variable.

This link takes you to the dataset in spss and stata formats.