Early in the year, a buoyant Boris Johnson said that 2020 would be “a fantastic year for Britain”. Instead, in the months that followed, the UK faced its great public health crisis in a century. Over 44,000 Britons lost their lives to coronavirus and the Prime Minister himself was hospitalised and put into intensive care. Despite the government’s initial reluctance to impose lockdown measures, the UK had almost ground to a halt by mid-March.

Though all major political parties backed the measures, they were not without criticism. Some argued that they were economically disastrous , draconian, and illiberal. Others simply refused to abide by them at all.

In our new paper, we use data from the latest British Election Study Internet Panel wave in June 2020 to test how voters’ attitudes towards coronavirus measures are structured. One way of doing so is through the lens of what political scientists call “spatial politics”. That is to say, how do these attitudes vary according to existing political divides like the left-right economic divide or the liberal-authoritarian cultural divide?

Figure 1 Self and Party Placements on Infections/EconomyFigure 1 shows that voters much preferred reducing infections over saving the economy. On a 0-10 scale where 0 = “Reduce infections even if it damages the economy ” and 10 = “Save the economy even if it increases infections”, the average voter placed themself at 3.5. This means that voters rated themselves as more willing to favour economic sacrifices over greater infections than they rated either the ruling Conservative party (6.6) or the Labour opposition (3.9) (although the average voter saw themself as being much closer to Labour than to the Conservatives). 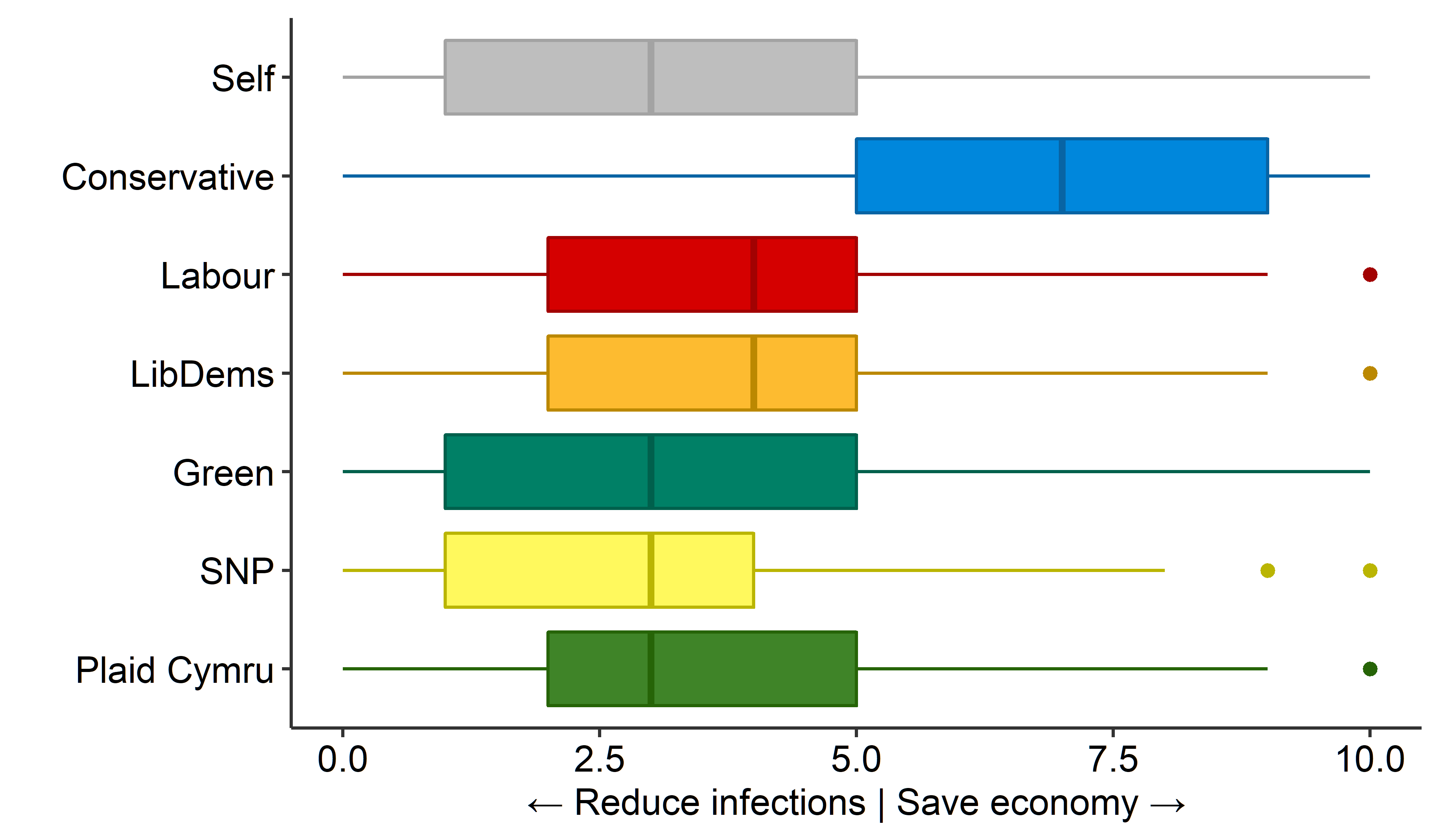 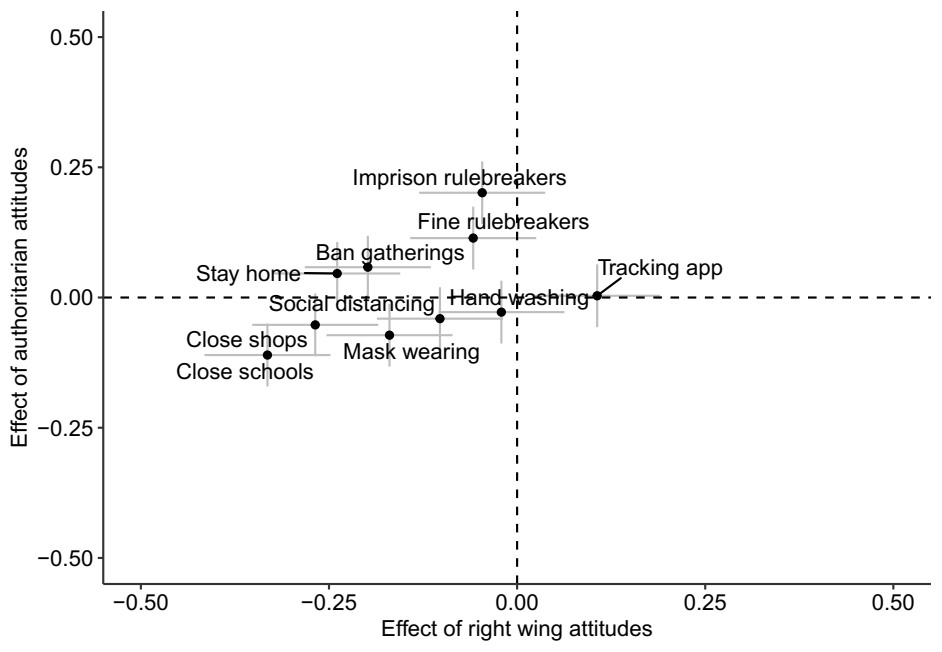 Effect of left-right and liberal-authoritarian attitudes on support for coronavirus measuresFigure 3 shows where each coronavirus measure falls on the economic left-right and cultural liberal-authoritarian dimensions. As we can see, coronavirus policy measures show greater variation over the left-right dimension than they do the liberal-authoritarian one. For instance, holding right-wing beliefs predicts much lower support for closing schools or shops, engaging in social distancing and mask wearing, and banning gatherings. On the other hand, and despite popular perceptions that liberals are more likely to support policies to tackle the coronavirus, holding liberal beliefs often shows effects that are small or even in the opposite direction to what we might expect. These voters are actually less likely to support COVID policies that limit individual freedom (banning gatherings and staying at home) or are highly punitive (fining or imprisoning rule-breakers) than their more authoritarian counterparts. 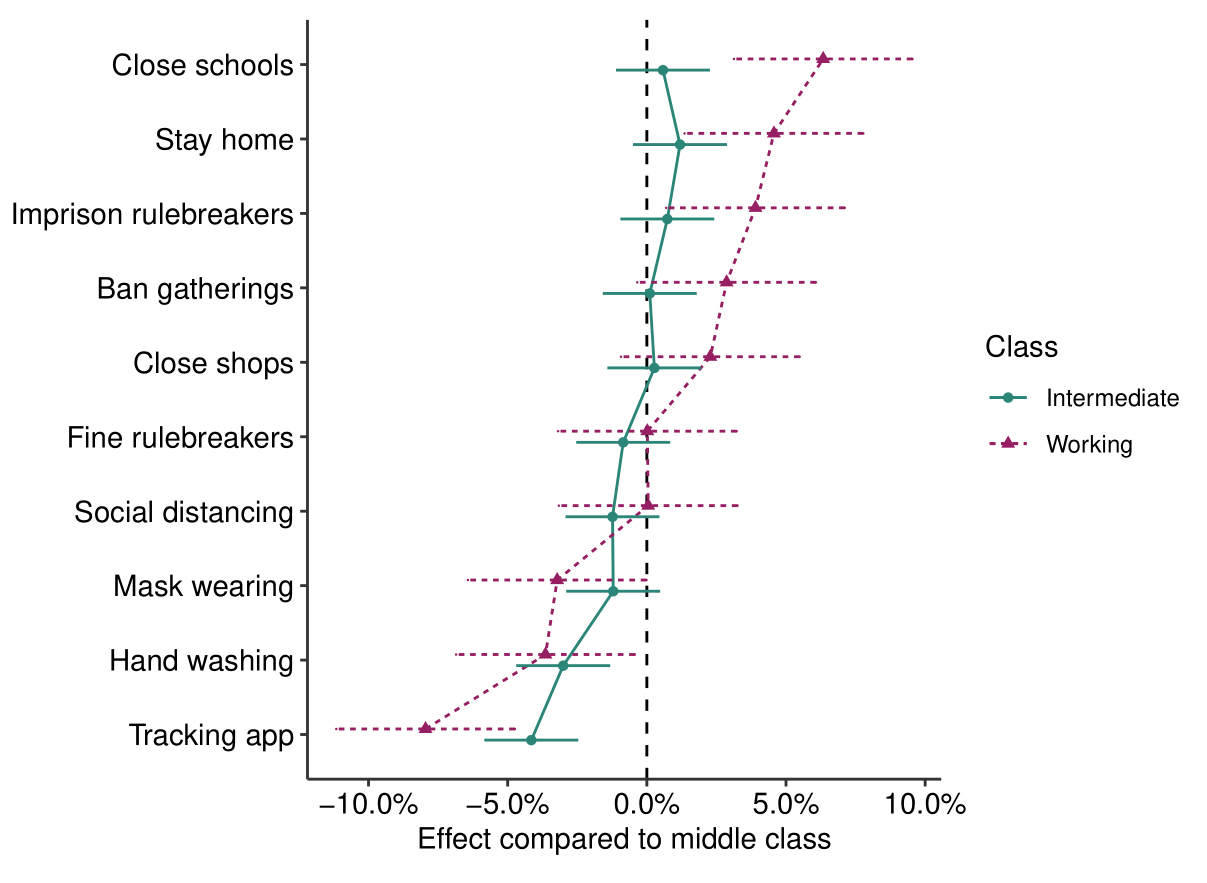 Effect of occupational class on support for coronavirus measures

Thus, British voters already held structured views towards coronavirus policy measures even as early as June 2020, when our fieldwork took place. While strong measures to reduce infections are popular in general, 2019 Conservative voters were much less likely to support these policies where they impose economic costs on Britain than other voters. Their scepticism reflects the fact that attitudes towards these policies are polarised across the economic left-right dimension, perhaps reflecting the heavy tool that businesses and the economy have had to pay to tackle the virus. Taken together, our results suggest that support for coronavirus policies are most strongly a left phenomenon and that liberals are, on average, actually less likely to support the government’s measures than authoritarian voters. It is worth noting, however, that there is also some variation across measures too, and that different aspects of coronavirus policy tap into different parts of the existing political landscape.

So what does this all mean for party competition in Britain? Most of all, our findings suggest that the Conservative Party has a tough time ahead if it is to hold together the coalition it built at the last election. Indeed, as coronavirus policies are more popular among working-class voters, the party risks losing its newly won working-class supporters if it takes a relaxed approach to tackling the virus. Furthermore, doing so would also put them out of line with the views of the public as a whole.

Overall, the coronavirus crisis seems to be politicised around existing left-right economic competition in strong contrast to British politics’ recent pivot towards competition structured around liberal-authoritarian issues like immigration and the EU. This is bad news for a party like the Conservatives that drew its recent gains from a coalition of supporters that straddles this left-right divide. Thus, one of the long-lasting implications of the coronavirus crisis might be to push political competition in Britain back towards its traditional economic roots.