The Government is losing support over its handling of Coronavirus, especially among its new 2019 voters

Competence reputations, once lost, are extremely hard to recover. Furthermore, competence signals can, when large and salient, cut through existing political loyalties and cause voters to switch their support. The voters who are most likely to punish a party for a loss of competence are likely to be those voters who hold a weaker attachment to the party in the first place.

This blog (based on details in this report) shows how these things have come to be true for the Conservative government, how the government’s handling of the coronavirus crisis has already damaged the party – just seven months from the December 2019 election – and how the losses the party has experienced have been greatest among the party’s newest voters in 2019, amongst whom the party has suffered a bigger hit to its reputation for competence. We also report how voters’ Brexit preferences, and their experience of financial support during the crisis, have provided no discernable insulation so far for the Conservative party from its handling of the pandemic.

Our analyses use wave 20 of the BES internet panel which was fielded between June 3rd and 22nd 2020. For context, these dates sit towards the end of the UK’s first national ‘lockdown’, in which citizens were advised to stay at home, leaving only to purchase essential supplies or to engage in exercise locally for an hour per day. At the time of responding, our sample had already experienced several months of these measures, which were announced on March 23rd and not substantially softened until July 4th. The period also coincided with government decisions about retaining and defending Dominic Cummings.

Figure 1 shows the flow of the vote between the December 2019 election (using reported vote) and June 2020 (using vote intention). As of June 2020, the Government had lost the support of a quarter of its December 2019 voters, who had mainly switched to ‘undecided’. Very few had swapped to actively planning to vote for Labour (3% of 2019 Conservative voters). These losses to ‘undecided’ are not irretrievable voters for the Conservative Party, but they are the voters who are vulnerable to either staying at home come the next election or being picked off by one of the parties on the Conservatives’ flanks. 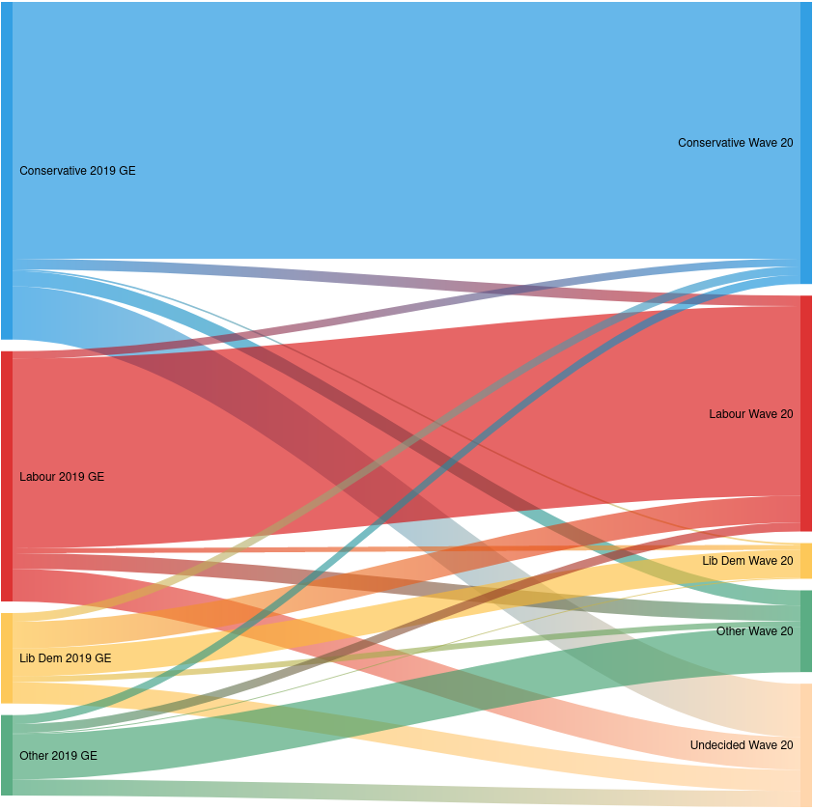 Figure 2 shows the % ‘defecting’ (no longer intending to vote Conservative) among both groups of voters in the BES. 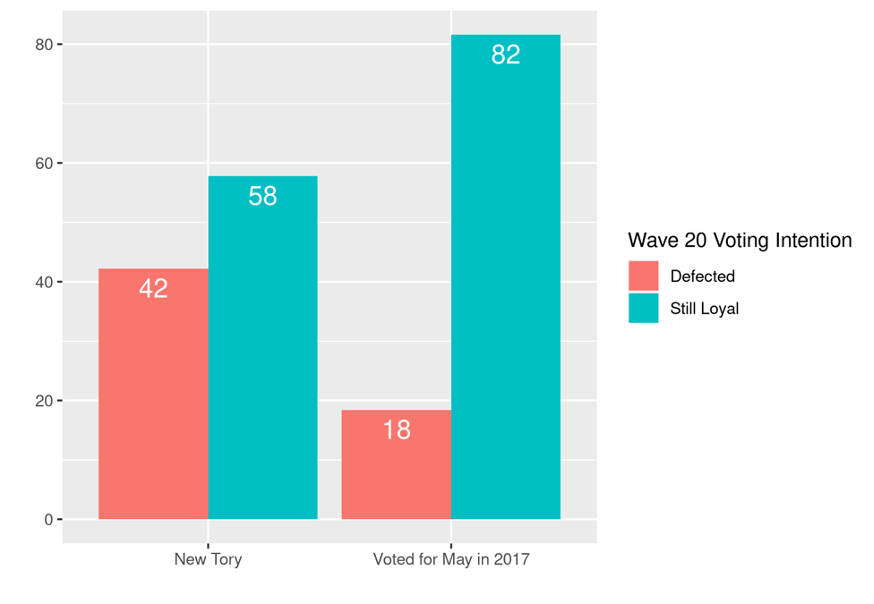 Of the 25% of our 2019 Conservative voters who had not voted for May in 2017, the attrition rate is 42%. Among the rest, who voted Conservative in at least two consecutive elections, only 18% did not declare a Conservative voting intention. This suggests that far from becoming strongly attached to Boris Johnson’s Conservatives, these voters are much more likely to abandon the Conservatives over time.

That this has happened so quickly, and so substantially, is due to poor government handling evaluations of the pandemic. 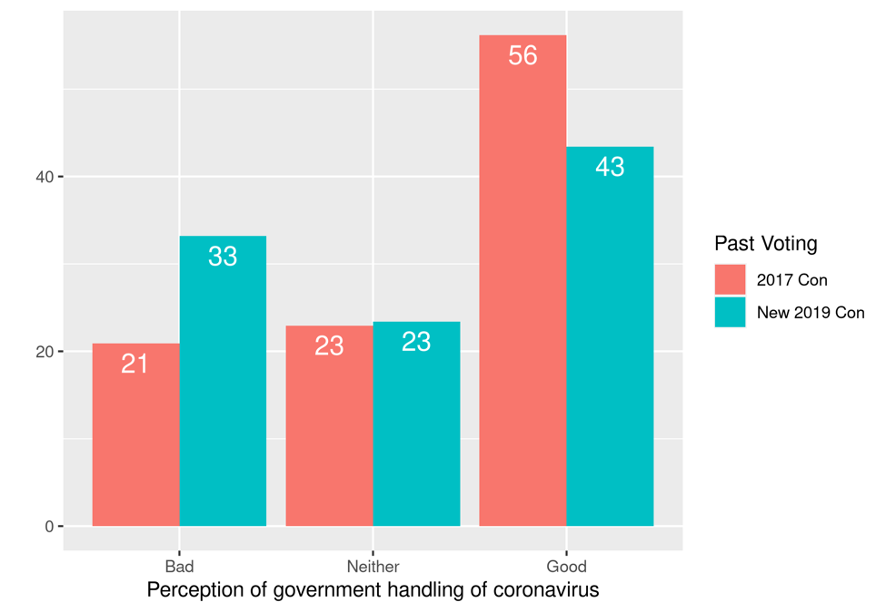 Competence ratings have a clear and additional effect to traditional party loyalties, and also to a person’s preferences about leaving the EU.

Nor is it the case that voter’s lockdown preferences have led to substantial losses in Conservative support in this period, and these effects are dwarfed by the much larger effects of the party’s coronavirus crisis handling.

Figures 4a and 4b shows that coronavirus handling has a much larger effect than people’s preferences about lockdown trade-offs. Looking across the different probabilities across the values of each scale, we see that moving from a more restrictive to a more lenient position on the lockdown measures results in very little change in the probability of voting for the Conservatives, whereas the effect is dramatic across the government handling scale. 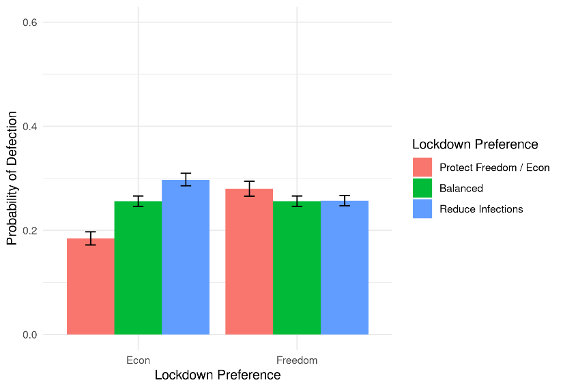 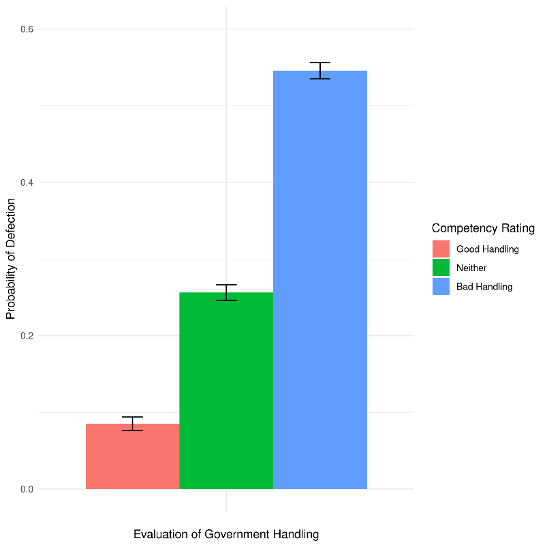 Figures 4a and 4b: Implied Probability of Defecting by Ideological Position on Lockdown and Perception of Government Handling

The BES blog by Jon Mellon, Jack Bailey, and Chris Prosser provides in-depth analysis of how lockdown preferences match onto existing political dimensions. We find that Conservative defectors barely differ from loyalists in their views of whether lockdown is worth the cost to personal freedom or the economy, and if anything are slightly more willing to make a trade off to tackle the virus.

For all of the current talk on the Conservative backbenches of losing voters over the very idea of restrictive measures, our analysis suggests that voters are far less concerned with the principle and far more disgruntled at what is perceived to be a rather poor execution.

Another way of thinking about the ‘red wall’ is the impact of voters’ Brexit preferences on voting for the Conservatives in 2019 (and the preponderance of formerly Labour supporting leave voters in the North West of England and Yorkshire and Humber).

We find no effect of a voters’ Brexit preferences on their handling ratings of the Conservatives, nor of their likelihood of defection. We can illustrate these similarities in handling ratings by breaking down government handling evaluations by Brexit vote, as we do in Figure 5. 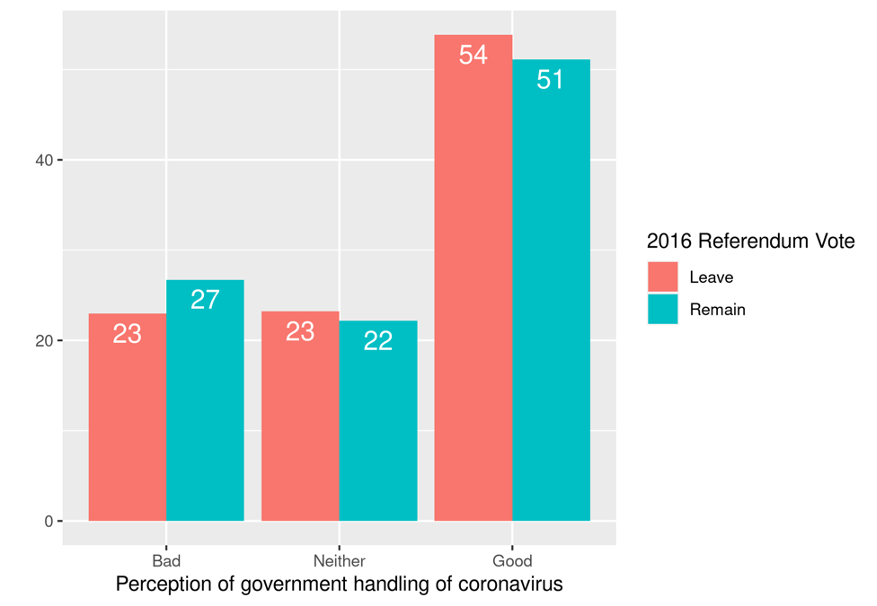 We focus here only on 2019 December Conservative voters, and the largest majority of these were Leave voters. We would also expect loyal Remain voting Conservatives in 2019 to be especially positive about the Conservatives. However, we do not find the effect we might expect if Brexit acts as a lens through which other political judgements are shaped. We also tested whether handling evaluations were less likely to lead to defections among those with a leave or remain preference, and found there was no further Brexit effect.

We further tested whether receipt of financial support (i.e. furlough payments to an individual or a member of their household) insulated the Conservatives against handling judgements, and neither of these potential factors – Brexit or financial support – were important. These analyses point to a simple but potentially damning verdict for the Conservative government. Its handling of the crisis has so far been sufficient to sway its voters, especially its new voters, from intending to vote for the party in future, and potential benefits of its actions have not mitigated these effects.

This is not to say that the government’s financial support packages might not have helped the party avoid even greater competence damage, such as through the avoidance of very high unemployment figures in the short-term. But the party could not count on the Brexit preferences of its voters either to shape its competence ratings, or to avoid an early electoral penalty for its handling of the coronavirus crisis.

Academics often think about the positional strategies and electoral dividends of a party’s policies, and the competence – or ‘valence’ – reputations that afford a party success or failure. When something so high profile, important and salient to the public is handled badly, or is perceived to be so, the competence effects are likely to be very substantial. This is the case in the first year of Boris Johnson’s government. The electoral risks are clear to see. If the Conservatives cannot win back their ‘undecided’ former voters, the new voters they gained in 2019, they will be damaged in a future election. It is unlikely that these losses will be averted through Brexit, unless the Conservatives’ reputation for competence can be restored.

Conservatives will hope that the damage done to the party will be healed once the coronavirus crisis is over. Our early analysis of Conservative vote losses is hopeful for the Conservatives in one respect: the party’s new voters in December haven’t yet gone back to Labour, or to the Liberal Democrats. They are less encouraging in many other respects. These new voters are not loyal to the Conservatives, and Brexit views have not made them more so.