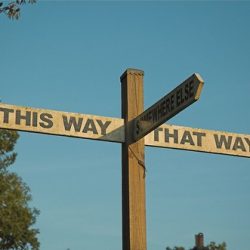 In our forthcoming book Electoral Shocks we show that how political parties respond to major political events is crucial to how those shocks affect voters’ choices and volatility, and ultimately which parties win and which parties lose.

The Brexit shock is the biggest shock in recent memory in British Politics. The Conservative Party has made a clear pitch for the Leave vote, although how competition with the Brexit Party evolves will depend on the outcome of the deal reached by Boris Johnson and the EU. The Liberal Democrats have made a clear strategic choice to make a strong and unapologetic pitch for the Remain vote with their ‘stop Brexit’ appeal, which may or may not turn out to be a viable campaigning position. Labour’s position by contrast has evolved from ‘constructive ambiguity’ to a quite nuanced stance of supporting the pursuit of a deal followed by a referendum (after an election) on whether to accept that deal. However, they have not declared whether or not they would back leaving the EU with that deal or remaining in the EU as official policy in any ensuing referendum. At the heart of this ambiguity is a genuine division within the party over the optimal strategy as well as ideological preferences.

The root of the strategic dilemma is that, on the one hand, a majority of Labour MPs (61%)[1]  represent constituencies that had a majority leave vote in 2016, whilst on the other a clear majority of Labour voters (68%) supported Remain in 2016. Interpreting this difference appears to have been extremely important in guiding Labour strategy, dividing opinions among Labour MPs.

With a very large sample (37,959) and questions designed specifically to measure these very types of question, the British Election Study wave 16 collected between 24th May and 18th June 2019 can provide some important insights into how that strategic situation looked earlier this year.

Of course, Labour is not looking to win only the votes of those who supported them in 2017, and some people have changed their Brexit preferences since 2016. Rather than focus on 2017 vote and 2016 EU referendum vote we can use the BES to look at the Brexit preferences of all potential Labour voters in May 2019. We defined respondents who scored Labour on a like-dislike scale at least 5 on a 0-10 scale[2] as potential supporters, making up 46% of all respondents that said they would vote and had decided how to vote.

Overall 70% of these potential Labour voters said they would vote to remain in the EU, with only 21% preferring to leave, with the rest saying they ‘don’t know’ or ‘would not vote’ in another referendum. In Leave constituencies these figures change only slightly to 65% and 25% respectively. When we narrow this down to Labour seats we see little evidence to suggest that Labour MPs in leave constituencies who are concerned about their re-election prospects need worry more about alienating leave voters than remain voters (see Figure 1). In Labour held sets with a Leave majority the figures are almost identical: 64% remain and 25% leave. Even in strong Leave Labour seats (where leave vote exceeded 60%) the number of potential Labour voters who would vote Remain (62%) is more than twice the number who would vote Leave (26%).

Obviously preferences may have shifted since June, but any such changes are unlikely to be so large as to outweigh the large gap that we see here. From the perspective of what their supporters want (which of course is not the only valid perspective), Labour is very much a Remain party, and this is true in the most Brexit supporting areas in Labour’s traditional heartlands just as it is in their pro-remain metropolitan seats. This represents what social scientists call an ecological fallacy: just because Labour voters disproportionately live in Leave areas doesn’t mean that they are more likely to be Leave voters themselves.  Electoral geography does matter, but when it comes to Brexit the impact of Leave versus Remain preferences on party choice is remarkably consistent. 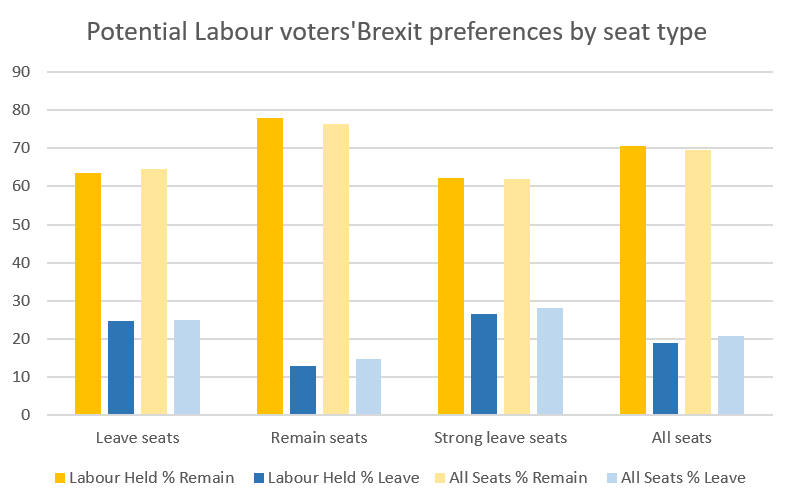 Note. Don’t know and would not vote are not displayed but are included in the calculations. These account for about 10% of respondents in the sample and is similar across all these subset. This means as a percentage of those who expressed a preference the percentage for both remain and leave is slightly higher than shown

[1] Referendum votes were not counted at constituency level so this figure and the definition of Leave/Remain constituencies throughout this piece use constituency estimates of the percent Leave vote provided by Chris Hanretty,

[2] Actual incidence of voting for a parties (reported post-election) increases with like scores (measured pre-election), ranging from 5% of those who scored 0 and 95% who scored 10 in the case of Labour in 2017. 42% of respondents who gave Labour a 5 on this scale actually voted Labour in 2017, compared to only 24% who scored 4 (in April/May). A total of 84% of 2017 Labour voters gave Labour a like-score of 5 or more before the election making this a reasonable cut-off for defining potential voters.