To speak to members of the BES team, please contact the following press offices.

For an archive of BES news stories please see the News page.

Please find our most recent release below:

Aggregate level volatility measures how much the national vote share of parties has changed between elections. This graph puts 2015 and 2017 in historical context and shows how remarkable they were. Only 2 elections have had higher aggregate volatility. The first was the 1918 election which came at the end of the First World War and followed the expansion of the franchise to women over 30. The second was in 1931 following the Great Depression and a budget crisis. It was won by a National Government formed at the request of the King, in a landslide. So 2015 and 2017 illustrated more aggregate volatility than the elections in 1945, 1979 and 1997. 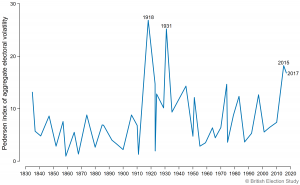 Individual-level volatility is the proportion of voters who switch to a different party in the second election of a pair.

The x axis represents the second election in adjacent elections.   The lowest level was at the start of the BES when 12.5% of voters switched in 1966. This has risen over time with voters becoming more volatile, and contrasts with the aggregate level measure. For instance 1966 and 2001 have similar levels of aggregate volatility but voters were twice as likely to switch parties by 2001. Using this measure, 2015 is a clear high point of individual volatility with 43% switching from 2010. The 2017 election is only slightly more stable but is still the second highest level of individual volatility in BES data. 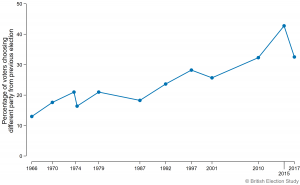 This shows how votes flowed between parties from 2010 to 2015. The size of the bar at either end of the ribbons (representing vote flow) is the total share of the vote each party received at the election. Note the dramatic way large scale switching manifested in 2015 in the collapse of the Lib Dem vote. They retained only 25% of their 2010 supporters and their losses were mostly to labour, but also to other parties. 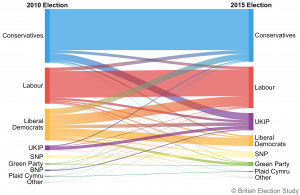 This shows how votes flowed between parties from 2015 to 2017. The size of the bar at either end of the ribbons (representing vote flow) is the total share of the vote each party received at the election. These changes were over only a 2 year period and therefore switching would be expected to be lower than in a 5 year cycle. However, 33% of BES respondents switched between these two elections including unusually high numbers from Labour to Conservative and vice versa (see next figure). 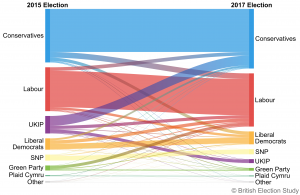 Switching of voters between the Labour and Conservative parties

This graph shows the combined switching from Labour to the Conservatives and from the Conservatives to Labour between one election and the next, as a percentage of Lab and Con voters at the previous election. This is a more unusual kind of volatility. In 2017, a higher proportion of Labour and Conservative voters switched to the other major party than in any previous election we can compare. This led to surprising geographic spread of both votes – Conservatives winning Mansfield and Middlesbrough South, Labour winning Canterbury and Battersea. 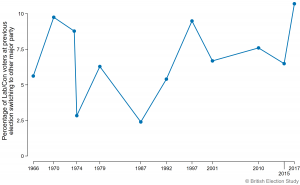 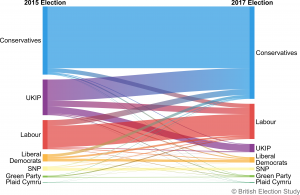 Where the Remain vote went 2017

This chart shows where those who voted Remain in the referendum voted in 2017 compared to how they voted in 2015. The Conservatives lost Remain voters to the Lib Dems and Labour. Despite an ambiguous position on the single market, Labour was seen as the best bet for pro EU voters. They won votes of Conservative Remainers along with pro EU Greens and Lib Dems. Nearly 2/3 of 2015 Greens went to Labour attracted by Jeremy Corbyn’s leadership. 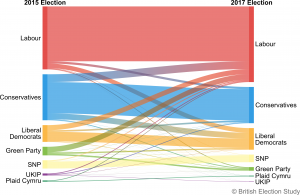