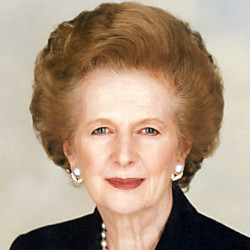 During the 1980s Britain witnessed an unprecedented geographical polarisation of voting behaviour and political attitudes. The term North-South divide became popular parlance, not just in the field of economics but also in British politics, as ‘the North’  – defined approximately by an imaginary line from the Humber Estuary  to the Severn Estuary – grew increasingly pro-Labour and the South pro-Conservative. During the economic turmoil of the 1970s and the deep recession of the  early 1980s, the North of Britain was hardest hit by economic restructuring and deindustrialisation. The Conservative Party under the leadership of Margaret Thatcher became associated with neo-Liberal economic policies  that many regarded as the solution to Britain’s economic problems. Others saw them as legitimising the mass unemployment of the era. Not surprisingly those favouring market based approaches were disproportionately likely to live in the South of Britain whilst the rest of the country favoured redistribution and government intervention (Fieldhouse, 1995).

The electoral map of Britain mirrored the geography of political attitudes, which in turn was a reflection of voters’ perceived economic interests (Johnston et. al,  1989).   Whilst there were pockets of affluence in the north and pockets of poverty in the South, the North-South divide became a reasonable shorthand description for the dominant political cleavage of the day. Indeed the class de-alignment  of the 1980s was strikingly uneven, driven largely by the growth of blue collar Thatcherites in the South. Roll forward 30 years and the shadow of Thatcher still looms large. As the country goes through another, even deeper, economic crisis and period of austerity, the economic and electoral map of Great Britain looks uncannily like that of the 1980s. Economic indicators suggest households in the North – especially the north-east and Yorkshire – have been the hardest hit by rising unemployment and falling house prices. Although the political North South Divide never went away, the rise of New Labour and a sustained period of economic growth dimmed the old regional economic and political divisions. Although Scotland continued to drift further from the Tories, their main gains between 1992 and 2010 were outside of the South East.

But the tide appears to have turned again. According to the first wave of the 2015 British Election Survey Internet Panel (BESIP) 29% of respondents (who express an intention) intend to vote Conservative in 2015. However, this varies from 43% in the South East to 15% in Scotland. Labour by contrast enjoy 53% support in the North East but only 24% in the South East. Overall, the Conservatives enjoy the support of only a fifth of respondents living to the north of the line dividing the country from the Severn to the Humber line (with the East and West midlands in the South) compared to two fifths to the south. But how far can this be regarded as Thatcher’s legacy? The BESIP also asked whether voters thought Thatcher was good or bad for Britain. Whilst across the nation the electorate is split evenly on this question (with 20% saying neither good nor bad or ‘don’t know’), respondents in the South thought Thatcher was good for Britain by a  ratio of approximately 5-3, with the same margin in the North believing Thatcher was bad for Britain.  Although the direction of causality is uncertain – Conservative voters may  simply more likely to look upon Thatcher more favourably  – it is striking that those who believe Thatcher was good for Britain are much more likely to say they will vote Conservative (58%) compared to only 3% who think she was bad for Britain. Of the Thatcherites not supporting the Conservatives, UKIP are the biggest beneficiaries (18%). So most voters in the North have a negative view of Thatcher, and the large majority will not vote Conservative; and Southerners disproportionally admire Thatcher and vote Tory.  But if the legacy of Thatcher can account for the re-emerging North-South divide, then we might expect those holding similar views on Thatcher to be equally likely to vote Conservative wherever they live. The chart shows that this is indeed largely the case. Labour is by far the most popular choice for voters in both North and South amongst those disapproving of Thatcher. Indeed, although Thatcher disapprovers are less common in the South they are MORE likely to vote Labour (68%) than those with the same view in the North (60%). In contrast, a majority of those believing Thatcher is good for Britain intend to vote Conservative in North and South, though the proportion is rather higher in the South (62%).  UKIP tends to draw the support of Thatcherites in equal proportions in both North and South, whilst the Liberal Democrats is still predominantly a home for anti-Thatcherites in the South.

With one year to go the General Election a lot can change. If the Conservatives are to remain the largest party or even win a majority they will need to secure the votes of a rather larger proportion of voters in the Northern half of Britain. However there is (as always) more than one way to skin a cat: there is plenty of room to grow the Conservative vote share amongst those who believe Thatcher was good for Britain  as well as amongst those who do not. How to achieve both is Cameron’s dilemma.