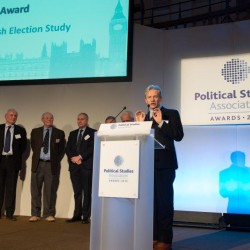 The British Election Study was awarded the prestigious Judge’s Award in 2013 from the Political Studies Association.

To mark the occasion, Professor Ed Fieldhouse (University of Manchester) reflected on the history of election studies and also outlined some of the new features of the new study run by the consortium of Manchester, Oxford and Nottingham Universities.

The British Election Study: History and the Future (by Professor Ed Fieldhouse)

The British Election Study (BES) is one of the longest running election studies world-wide and the longest running social science survey in the UK. It has made a major contribution to the understanding of political attitudes and behaviour over sixty years. Surveys have taken place immediately after every general election since 1964 (as well as two non-election year surveys in 1963 and 1969), and boosted Scottish, Welsh and ethnic minority samples have been gathered at various times. There have also been a number of panel studies, especially in recent years, designed to analyse political change: for example, when and why voters change their political allegiances during an electoral cycle and how these changes reflect events and campaigns. Despite the increased availability of opinion polls and other data about what voters think, the BES has remained a crucial tool for social scientists as well as for journalists, not-for-profit organisations, political parties and other researchers. This is undoubtedly because of the spread and depth of its content and also its use of reliable and robust scientific design and sampling.

The first study, conducted by David Butler and Donald Stokes in 1964, transformed the study of electoral behaviour in the UK. Their survey-based methodology enabled them to test a variety of explanations of electoral behaviour, and the use of random sampling of voters across Great Britain enabled them to apply their conclusions to the population in general. Inspired by the Michigan Studies (and ‘The American Voter’) the results of the 1964, 1966 and 1970 election studies were published in Political Change in Britain: Forces Shaping Electoral Choice (David Butler and Donald Stokes – Macmillan, 1969). The book emphasised the role of long-term forces in influencing the party choice of electors, including social class and partisan identification.  In 2010, following a poll of PSA members, the book was awarded the best book on British political studies published during the lifetime of the Association.

From 1974, the baton was passed to the University of Essex to continue the series started by Butler and Stokes. Lead by Professor Ivor Crewe, the Essex team conducted interview surveys following the general elections of February 1974, October 1974 and May 1979, plus a survey conducted after the referendum on Britain’s membership of the European Economic Community in 1975.The volume, ‘Decade of Dealignment’ by Bo Sarlvik and Ivor Crewe, painted a picture of a more volatile electorate than drawn by Butler and Stokes; one that was no longer tied to partisan loyalties and class politics.

From 1983, the BES returned to Nuffield College working in partnership with Social and Community Planning Research (now NatCen). Just as the geographical home of the BES shifted back from Essex to Oxford, the intellectual pendulum swung back too.  The BES team lead by Anthony Heath, Roger Jowell and John Curtice challenged the realignment thesis of the Essex Study in ‘How Britain Votes’ (1983), and later following the 1987 Election in their volume ‘Understanding Political Change’.

From 2001 to 2010 the BES moved back to Essex (David Sanders and Paul Whiteley) in partnership with the University of Dallas Texas (Howard Clarke and Marianne Stewart). The new Essex team introduced a number of innovations including a ‘rolling thunder’ campaign study and an internetpanel study. They examined the dynamics of short-term campaign factors on election choices and identified the importance of ‘valence’ politics in the new millennium, stressing in particular the importance of the perceived competence of the political parties and their leaders to deliver economic growth.

In 2015 the British electorate will go to the polls amidst pronounced socio-economic and political changes. The election will be fought in a context of the historic coalition government, potential constitutional upheaval and prolonged austerity. Reflecting this context, the 2015 study will focus on the issues of accountability, representation and disengagementand will address how the changing political, economic and social context impact on British electoral behaviour. Themed ‘Voters in Context’, the new study is led by Ed Fieldhouse, Jane Green, Hermann Schmitt (all Manchester), Geoff Evans (Nuffield College, Oxford,) and Cees van der Eijk (Nottingham); forming a consortium with an international advisory board and with broad collaborations with other related studies of elections in Britain. The study is designed to help our understanding of long-term political change, and the role of national and sub-national variations in the political and social context in shaping citizens’ attitudes and behaviour. Users will be able to analyse the influence of the geographical diversity in social, political and economic context through a spatially dispersed survey sample. Comparing voter responses across successive election studies will provide important evidence about the role of historical party political and institutional context. The study will allow scholars to understand the role of national institutional context by ensuring comparability between Britain and other countries and through a questionnaire design to suit and compare national as well as devolved political choices. It will include a boosted sample of Scottish respondents to analyse the 2014 Independence Referendum and a 2014-2017 inter-election panel to provide a platform for robust causal analysis of individual-level over-time change and user-defined ideas and experiments within a large 20,000 person sample. Data users will also be able to analyse the vote in the context of the daily short campaign, using innovative data collection from twitter alongside a daily voter survey.

The study will include:

The study will conduct a program of data linkage and harmonisation with related studies and data collected for administrative purposes, developing an integrated data infrastructure for the study of elections in Britain.

Partners in the BES include the Electoral Commission, to improve the public understanding of representation, engagement, and voter registration.