Lessons for the UK in electoral integrity. By Pippa Norris 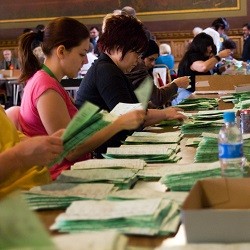 Issues about the integrity of UK elections have become a major concern in the run-up to the general election. In recent contests, questions have arisen over insecure postal ballots, proxy voting, and fraudulent practices. The May 7th 2015 UK general election will provide a further test case following warnings by the Electoral Commission of ‘ethnic kinship’ voting in British Pakistani and Bangladeshi communities, a practice thought to make these areas particularly vulnerable to electoral fraud.

Concern about the fairness of elections is not simply a matter confined to malcontents among the chattering classes; instead public disaffection with elections is linked with broader feelings about democracy. Thus the second wave of the 2015 BES panel survey (fielded in May-June 2014) demonstrates that feelings that the 2015 British general elections are likely to be unfair are closely linked with dissatisfaction with the overall performance of British democracy. The figure below demonstrates the average score in answer to the question: “Thinking of the general election for the Westminster Parliament that will take place in May 2015, how fairly do you expect it to be conducted?” where 1 = Expect 2015 election to be conducted fairly, and 5 = Expect 2015 election to be conducted unfairly, according to how satisfied the respondent feels about UK democracy. This is not surprising; most citizens find it difficult to assess many aspects of how political institutions work, such as the effectiveness of parliament or the fairness of the courts. But elections remain the main opportunity for most people to connect directly with their leaders. If unhappy with the fairness of elections (for whatever reasons) these judgments are likely to colour their broader views about British democracy. And vice versa.

The UK is not alone in these concerns. The issue is perhaps best exemplified by partisan divisions in the United States over Republican allegations of voter fraud (impersonation) and Democratic claims of voter suppression. But the Florida disease has become contagious in other Anglo-American democracies, generating controversies about the Fair Elections Act in Canada and lost ballot boxes in Australia. Reforms to the process of electoral administration are also currently under debate in Ireland.

The consequences of irregularities are even more serious elsewhere in the world. The recent six week postponement of Nigeria’s presidential election, and delays in distributing voter ID cards, have triggered protests and violence.

Elsewhere contentious elections have sparked massive street protests in Cambodia, a military coup d’état in Thailand, bloody conflict in 2007 in Kenya, and the 2004 Orange Revolution in Ukraine.

But how do we know when complaints about electoral malpractices reflect genuine flaws and failures, and when they are false claims stoked by sore losers? When do new types of ‘convenience’ voting in Britain lead to security flaws and fraudulent practices? How will the UK general election stack up against contests in other Western democracies – and around the world?

To assess these issues, the Electoral Integrity Project based at Harvard and Sydney Universities has just released a new report and dataset for The Year in Elections 2014.

Expert assessments evaluate the state of the world’s elections each year. The third release of the Perceptions of Electoral Integrity (PEI) data-set covers 127 national parliamentary and presidential contests held from 1 July 2012 to 31 December 2014 in 107 countries worldwide. More elections will be evaluated as they are held in future years. The UK will be added to the sample in 2015 so we can better understand the UK’s electoral fairness in comparative perspective.

Evidence is gathered from a global survey of 1,429 domestic and international election experts (with a response rate of 29%). Immediately after each contest, the quality of each election is evaluated based on 49 indicators. Responses are clustered into eleven stages occurring throughout the electoral cycle and then summed to construct an overall 100-point expert Perception of Electoral Integrity (PEI) index and ranking.

The world map of electoral integrity identifies the best and worst elections around the globe during 2014.

More details can be found from new books by Pippa Norris on Why Electoral Integrity Matters and Why Elections Fail, bothfrom Cambridge University Press, New York.

Further information, the complete PEI_3 dataset, a YouTube video presentation, and a copy of the full report can all be downloaded from www.electoralintegrityproject.com

Pippa Norris is Laureate Research Fellow and Professor of Government and International Relations at the University of Sydney, McGuire Lecturer in Comparative Politics at Harvard University, and Director of the Electoral Integrity Project.