All Roads lead to UKIP? By Geoff Evans and Jon Mellon (University of Oxford) 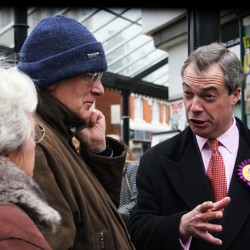 Do the Conservatives or Labour need to worry most about UKIP in 2015?  Certainly, Labour constituencies see fairly high levels of UKIP support (notably at the recent Heywood & Middleton by-election), suggesting there is credence to the argument that Labour is losing its disaffected traditional and typically working class voters to UKIP.   At the same time we have already shown (Evans and Mellon BES Blog 2014) that most UKIP voters say they had previously voted Conservative.  So is the argument about UKIP stealing core Labour voters spurious? How do we reconcile evidence of UKIP support in traditional working class Labour constituencies with the individual level evidence that UKIP voters, or at least those currently intending to vote for UKIP,  report being Conservatives in 2010? In this blog we develop a better understanding of the sources and implications of UKIP support by looking back over a longer time period.

Our argument is that Labour’s move to the ‘liberal consensus’ on the EU and immigration left many of their core voters out in the cold a long time before UKIP were an effective political presence. These voters left Labour in 2001, 2005 and 2010.  To some degree therefore what UKIP are doing is picking up already disaffected former Labour voters from the Conservatives and elsewhere. UKIP will not be a great threat to too many Labour seats, they will probably steal more votes from the opposition parties in those seats, or people who had not voted in 2010. Hence the ‘mis-match between’ constituency level findings and individual voters’ reported patterns of defection.

To demonstrate this we first present the flow of the vote to UKIP from 2005–2014 using respondents who were in the 2005 and 2010 BES panel surveys as well as those in the third wave (autumn 2014) of the current BES panel study.

We can see that UKIP’s voters are overwhelmingly taken from those who voted Conservative in 2010.  Even the Liberals lose more to UKIP than do Labour. However, we can also see that 2005 Labour voters also gravitated to UKIP. What distinguishes them is that they did so via more circuitous routes. The clear majority of 2005 Labour voters who supported UKIP in 2014 had left the party by 2010. (1)

80% of 2005 Conservatives who intended to vote for UKIP in 2014 were still Conservative in 2010, whereas a mere 40% of 2005 Labour voters were still Labour then. So Labour’s loss to UKIP is partly hidden by its supporters having gone through other paths prior to arriving at UKIP. Moreover, these defecting Labour voters are to a large degree the sorts of people that new Labour will have alienated.

Figures 3 and 4 show predictable patterns: working class and anti-EU 2005 Labour voters tend to be those who ended up at UKIP:

That the EU and immigration eventually merged as an issue, particularly after the 2004 accession of former Communist countries, is also indicated by the similarity in the patterns of attitudes towards immigration shared by those who did or did not switch from Labour to UKIP.

So the damage to Labour’s core support had already been done by new Labour’s focus on a pro-middle class, pro-EU, and as it turned out pro-immigration agenda. Indeed, we know already that the EU issue was the main reason why voters left Labour as early as 1997-2001 (Evans 2002) and immigration was an important issue for such defection in 2010 (Evans and Chzhen 2013). In contrast, the damage to the Conservatives is only now happening.

This is confirmed at the constituency level. If we look at UKIP supporters in Labour seats we see that:

The answer to why UKIP are doing well in Labour seats but are unlikely to win these seats is that there are still a lot of Conservative voters in Labour seats (25% of the vote in 2010 on average) and many of these are 2010 Labour defectors. UKIP have picked up support disproportionately from former Labour voters in Labour constituencies.(2)

So, to answer our question: some roads do indeed lead to UKIP, but travellers on the ‘left’ started the journey some time back, so it’s the Conservatives that will feel most of the pain in 2015.

1 These figures use recalled profile data for the 2010 and 2005 vote. These match up well with the panel data with a correspondence in excess of 90%.

2 We also checked these inferences using multivariate models of vote. These show that Labour 2005 voters are more likely than other Conservatives to switch to UKIP. Manual workers are more likely to switch to UKIP. Whereas Conservative/Labour switching is unrelated to either party’s handling of immigration, Conservative/UKIP switching is strongly (negatively) predicted by 2010 perceptions of both Conservative and Labour handling of immigration. These rigorous analyses add support to the argument that those supporters who left Labour over immigration moved onto UKIP and that Labour to Conservative defectors are prime targets for UKIP