An electoral system fit for purpose? 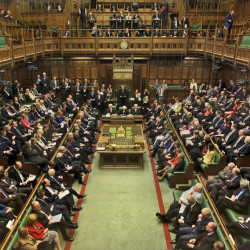 The British Election Study is lucky enough to have a board of eminent experts in the world of politics who advise on how our data can reach a broad range of users outside academia. The group, whose members span the three main British political parties as well as representatives from non-partisan groups, made an important contribution to the BES event in Westminster on 9 December by asking “Is our political system fit for purpose?” in a roundtable discussion.

Here is how five of them summarise their thoughts, followed by Professor John Curtis (Strathclyde University), who  summed up the roundtable discussion. Over 120 guests contributed to the discussion, which is chaired by Alastair Stewart (Presenter of ITV News at 6.30pm).

Lord Andrew Cooper, founder of Populus and former Director of Strategy at No 10 Downing Street
This Parliament has seen an unprecedented swing away from the established mainstream UK parties.

With less than five months until the 2015 general election, the polls are suggesting that the sum of Conservative, Labour and Liberal Democrat support, which accounted for 89% of votes cast at the last election, has dropped to around 72%.

If the story told now by the polls is reflected in the result of next year’s election, there will have been a stampede away from the mainstream, with more than 7 million voters switching their support during the course of this Parliament, away from Labour, Conservative and Lib Dem to UKIP, Green, SNP or smaller fringe parties.

There are many reasons behind this trend, but for many voters it comes down to a wholesale loss of faith in our whole political system, which they feel no longer seems capable of representing their interests or dealing with the issues that most matter to them.

No political party has won more than 36% of the vote in any national election since 2001, a level of support below which our electoral system struggles to deliver the strong single-party government that is meant to be its principal advantage.  The big swing from the mainstream to ‘Others’ makes it much more likely we end up with hung Parliaments and messy coalitions – which most voters believe will make the problems with our system worse, not better.

The challenge is there for the main parties to reconnect and start to grow the pool of voters willing to consider voting for them – and to show that our political system is still fit for purpose.

Greg Cook, Head of Political Strategy, The Labour Party
The most obvious test is whether the political system has provided a stable government which is broadly reflective of the preferences of the electorate. Does it meet the test that you can get rid of a government that you do not approve of? Leaving aside party political points, it is at least arguable that in most if not all elections since 1945 it has produced a government which the country voted for.

There are of course new tests

The British Election Study thus plays a vital role in providing authoritative and definitive data on how the trends of opinion on all of these questions may develop.

Lord Tyler, Liberal Democrat spokesman on constitutional reform
Imagine Friday 8 May 2015: Party A with the most MPs has fewer votes than Party B; Party C with 15% of the votes has fewer than 1% of the MPs; Party D has 40 MPs in Scotland and is ready to join a UK coalition to determined English law but over-rule the majority in England; 75% of pensioners have voted but fewer than 25% of 18-24 year-olds have done so, and the overall turnout is just 60%; the new PM looks like entering No 10 with the support of fewer than 25% of the total electorate. Fit for purpose ?   You must be joking !   What should BES be telling us ? Beware democratic illegitimacy!

Neil Serougi, Vice Chair of Freedom from Torture
Is our political system fit for purpose? It’s a question that unfailingly invites public scepticism and opprobrium in equal measure. It’s also a question that becomes more difficult to address amidst the relentless bad news that seems to fall out of any current narrative about politics. Trying to remember a ‘feel good’ story in politics is now almost a specialist project in the face of declining political participation, fears about a broken society and a political class seen as self-serving and detached. But is this where we should really focus our attention? Important as it is to fix it, a broken system doesn’t necessarily imply an irredeemable dysfunction. Paradoxically it might even serve as a catalyst for alternative ways of ‘doing’ politics and the ‘anti-politics’ in the public mood maybe short hand for something more dynamic than apolitical. So does this mean we can be complacent? Sit back and wait for the political system to adjust in some functionalist fashion, rebalancing its different processes into an effective sum of its parts? It’s a nice idea but unlikely and this this cuts to the core of the question; exactly what do we believe the purpose of the political system to be? Crucial is its role in shaping our political culture so that it is ethically fit for purpose in a diverse and multi-faceted environment. We need to see the world in a different consistency, free from the underlying culture of civic authoritarianism that underpins intolerance around the rights of ‘the other’. The failure of political leadership around the plight of refugees and asylum seekers; the unedifying struggle to be tough on immigration; the abandonment of any attempt to develop policies around a consistent application of rights and principles; all have created a discordant note that marginalises the desperation of those who arrive in our country. It also reframes the question about fitness for purpose to mean something more profound. The political system is failing in this respect. Its fitness for purpose hamstrung by the absence of strong leadership amidst the politics of fear. Political success is now based on damage limitation and the danger is it leads us to a place where we wouldn’t want to be.

Katie Ghose Chief Executive, Electoral Reform Society
As head of the Electoral Reform Society, you would expect me to argue that our voting system, among other features of our democracy, is not fit for purpose and has been out of shape for some time. What has changed recently is the marked rise in support for challenger parties (Greens, UKIP, SNP). This has brought the long term trend of decline in support for Conservatives and Labour into stark relief and jolted commentators into a realisation that multi-party politics is here to stay. Suddenly, a winner takes all voting system designed for two parties seems hopelessly incapable of coping with the real choices voters want to express in a system where at least six parties are in play.
Modern voters shop around; they lack a life-long attachment to one party or even to voting at all.  They are hard to fathom which is why no-one can call the 2015 General Election outcome. This is an election that will leave many people feeling angry that their voices weren’t heard; their votes not fairly translated into seats. At the same time, another power-sharing government is entirely possible. In this climate, understanding how voters are currently behaving (tactical voting), how they might behave under different systems and unpacking voters’ views about coalition or minority governments are all areas where the BES can bring valuable insights.

Professor John Curtice, BES Consultant
At the moment, it looks as though the share of the vote won by the Conservatives and Labour combined could fall next May to an all-time low of three-fifths. Although the country’s traditional third party, the Liberal Democrats, are in the doldrums, UKIP are posing the most significant independent fourth-party challenge in post-war English politics, while both the SNP and the Greens are enjoying unprecedented levels of popularity.

This is not what is supposed to happen under Britain’s single member plurality electoral system. Voters are encouraged to focus on the ‘real’ choice– either to re-elect the incumbent government or else give the opposition the opportunity to see if it can do any better. Voting for anyone else is not only likely to be a wasted vote (because third parties struggle to win seats) but also runs the risk of ‘letting the other side in’.

It is a message that both the Conservatives and Labour will drive home relentlessly in the next five months. The outcome next May could well rest on whether or not they succeed. But what happens – and why – will also be a vital part of the continuing debate about the merits of Britain’s first-past-the-post electoral system.

Perhaps support for the ‘smaller’ parties will fall away between now and May. This might, of course, be because their policies or politicians become less popular. But it could also be because their supporters do come to the conclusion that their votes could be ‘wasted’ and/or that they could help the party they like least get into government.

If that happens the electoral system would be seen to have done its job. However, the question that would then arise is whether those voters who were persuaded by such considerations to change their minds are happy or unhappy with the choice they have made.

On the other hand, perhaps there is little or no recovery in the level of support for the two biggest parties. That would suggest the supporters of smaller parties rejected the logic of the single member plurality system. Perhaps, for example, they did not care much whether the Conservatives or Labour formed the next government.

But not necessarily so. Maybe these voters thought that the party they backed did have a chance of winning – at least in their own constituency – and in that they were mistaken. Or perhaps they failed to appreciate that they were at risk of ‘letting the other side in’. Maybe as a result they now regret the choice they made – and will be disinclined to repeat it in future.

The BES is uniquely capable of identifying those who remain loyal to one of the smaller parties between now and next May, and those who do not. If at the same time it were to chart these voters’ expectations of the consequences of their proposed choice together with their eventual feelings about how they finally voted, we would have a better understanding of whether Britain’s electoral system is indeed still likely to prove fit for purpose or not.