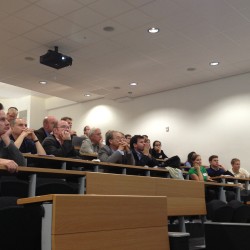 The new BES 2015 team (Professors Ed Fieldhouse, Jane Green, Geoff Evans, Hermann Schmitt and Cees van der Eijk) officially started on 1st October 2013 following a handover meeting with the Essex team at Nuffield College. This summary covers BES activities over the past year as well as activities which fall under a linked study funded under the ESRC Future of UK and Scotland Program “The Scottish Independence Referendum and the British voter: an enhancement to the British Election Study Internet Panel”.

Under the BES/ESRC Future of UK and Scotland Program the BES Internet Panel Study (BESIP) was redesigned to accommodate additional waves in February/March and September 2014. YouGov were appointed as the fieldwork agency to conduct the internet panel study, following an open competitive tendering process.

Substantial progress has been made on the BES surveys and questionnaire design. BESIP data has been delivered and can be downloaded here. Wave 1 data was released on 7th May 2014 and Wave 2 data was released on 2nd September 2014. These data included linked constituency information. The new Mapping module for BESIP Wave 3 has been designed and tested in conjunction with Cara Wong and Jake Bowers. The first BES Expert Survey on party positions will be launched next week.  Finally, GfK NOP has been appointed for 2015 in-person survey fieldwork and work has begun designing the sample for 2015.

There have been several appointments made to the BES team. These include two Research Associates (Dr Jon Mellon and Kathryn Simpson), a Research Administrator (Mark Kelly), Communications and Marketing Manager (Mike Addelman), the BES Advisory Board and the BES Impact Stakeholder Group.

The BES invited colleagues to submit proposals for free survey content as part of the BES Internet Panel, devoting up to 5 minutes of survey space per wave. The accepted user proposals in BESIP Wave 1 and Wave 2 cover a wide-range of topics in relation to citizens’ evaluations of the fulfillment of election pledges, locality and candidate effects, social identity approach to partisanship, canvassing and campaigning in the general election, UK voters’ perceptions of income inequality, voter uncertainty about party policy positions, candidate class and voter choice in Britain and social capital and elements of democracy. The BES team are delighted to extend the survey to colleagues in this way. User proposals are still being accepted via a rolling application process.

Numerous BES consultations, activities and media briefings have taken place over the past year. The BES Team consulted with experts on Scottish and Welsh politics about the content of the BESIP and held consultation meetings in Cardiff (January 2014) and Edinburgh (February 2014). Members of the team presented at PSA media briefing’s on the European Parliament election and Scottish Independence Referendum in London (May & June 2014)  and activities included research meetings, an Advisory Board meeting and presentation of BES plans and progress in Edinburgh (September 2014). Future consultations and activities include the launch of the BES Data Playground, release of wave 3 data and findings (December 2014 London)  and an event with NCRM/BES/BPC in London (February 2015).

The BES has received extensive media coverage with BES findings being publicized on BBC Breakfast News (multiple occasions), Sky News, The Today Programme and the BBC Vote 2014 on Local and European Elections with David Dimbleby. BES findings have been featured in national newspapers such as The Telegraph, The Daily Express, The Financial Times (and The Huffington Post). Findings have also been published in relation to the Scottish Independence Referendum in The Herald Scotland, The Scotsman, The Guardian, The Daily Mail, Daily Record, Scottish Daily Star, The Express Scotland, The Scottish Daily Mail, The Times Scotland.

The BES Twitter account is up and running (@BESResearch) and already has 647 followers. A BES Impact film has been commissioned with Feedback Films. Interviews have been conducted with members of the BES Scientific Team, Advisory Board members and non-specialists on various aspects of the BES. The film will be available on the BES website, Twitter, Facebook and Communications Offices at the University of Manchester, Nottingham and Oxford.

Our new BES website was commissioned, designed and developed with Psycle Interactive Ltd and launched on 7th May. The innovative online ‘BES Data Playground’ has been designed and will be released soon. The Data Playground will allow users to create their own graphs and tables so that they can run descriptive analysis of BES data without needing to download the data or use statistical software.  Visitors to the BES website can sign up to the BES Community. As part of the BES Community each member will receive a quarterly BES Newsletter (from September 2014), which provides information on BES news, BES findings, BES in the media and the BES team.