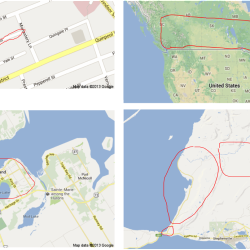 The BES mapping project will collect information about respondents’ defined local communities – generated by respondents drawing their own map of their local community – and will compare this information – and its effects on attitudes, beliefs and voting behaviours – against information based on administrative geographic units, such as wards, census areas and parliamentary constituencies.

Respondents draw their own map using google maps, as pictured to the left. The importance of gaining information of respondent-defined local communities is highlighted by the different conceptions that people hold about the nature of their local community. These images reveal four local communities drawn by Canadian survey respondents in the earlier version of the mapping project run by Professors Wong, Bowers and Rubenson.

Data will be gathered on respondent’s perceptions of local demography, economic conditions and experiences, local tendencies to turnout to vote in elections, cuts to local services, the legacy of previous austerity measures and economic hardships, and information about local political contests.