Devolution deficit: how the promise of further devolution can save the Union 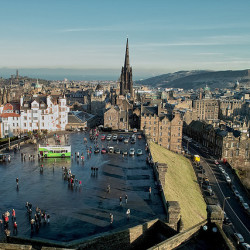 As the Scottish referendum campaign moves into the final three months the pro Union parties have emphasised their commitment to more devolution should Scotland choose to remain in the Union. The Conservatives recently outlined plans to devolve additional tax raising powers to the Scottish Parliament, allowing it to raise 40% of the money it spends. According to the Strathclyde Commission “the Scottish Parliament should be responsible for setting the rates and bands of personal income tax in Scotland”. The Tory plans would also give Holyrood the additional responsibilities for welfare policies north of the border. Further devolution is also promised by Labour and the Liberal Democrats. Like the Tories, Labour’s proposals would also give the Scottish Parliament the power to raise 40% of its total budget, and devolving three quarters of the 20p tax rate and control over housing benefit. The Liberal Democrats suggest that, “income tax paid by Scottish taxpayers should be almost entirely the responsibility of the Scottish Parliament” and should raise 50% of the money it spends and have control over income, capital gains and inheritance tax.

The SNP might be excused in thinking that the commitment to devolution amongst the major parties is as much a matter of electoral expediency as a matter of principle. The first wave of the British Election Study internet panel survey carried out between February 20th and March 9th, shows that almost three-quarters of Scottish voters want more devolution. Moreover, even amongst those intending to vote ‘no’ a majority (57%) say they want some or many more powers for Scotland (compared to 96% of ‘Yes’ voters).

The BES also asked about which institution voters thought should be responsible for 6 key policy areas (welfare, NHS, schools, defence, taxes and the police). Of these, defence was the only policy domain that a majority of Scottish voters thought should be reserved for the U.K Parliament. Whilst policy areas that are already devolved (schools, police, and the NHS) do very little to separate the ‘yays’ from the ‘nays’, those wanting devolution of tax and welfare policy lean towards ‘Yes’ but not decisively. A significant minority of these voters wanting more tax and welfare powers intend to vote No, suggesting that promises of more devolution do have the potential to shore up the ‘Better Together’ support.

What really matters then is not just the level of support for devolution but the extent to which supporters of further devolution think their aspirations will be met within the Union. Overall half of voters think that devolution will happen even if Scotland votes ‘No’. Figure 1 below divides the electorate into 4 groups depending if they want more devolution or not and whether they think it will happen[1]. Crucially the largest group is those that want more devolution but think it will happen anyway (41%). Of these only 35% say they will vote ‘Yes’ in September. Contrast this with the 71% of those wanting more devolution but not expecting it who intend to vote yes. In other words wanting devolution is not sufficient for support for independence. It has to be accompanied by a belief that this will not be achieved in the Union.

Another way of looking at this is to count everyone who expects to get less devolution if Scotland votes ‘No’ than they would like. By this definition, 42% of Scottish voters have a devolution-deficit, two-thirds of whom intend to vote ‘Yes’. In contrast 80% of the rest say they will vote ‘No’ (Figure 2). The Yes Scotland campaign therefore has two related problems. One is that not enough voters are convinced that their demands will be unmet within the Union. The other is that even amongst those who do not expect the Union to satisfy their wishes, a substantial minority say they vote ‘No’ anyway or are undecided.

To test whether the devolution-deficit matters to support for independence, even after taking other factors into account, we use a method called logistic regression modelling. The table below list the factors which contribute most to explaining whether respondents said they would vote yes. Other factors included in the model but which were not statistically significant were Scottishness, age and gender. Overall, the model correctly ‘predicts’ 93% of cases.[3] The results of the model underline the importance of the perceived economic impact of independence, whether in terms of the effect on the personal economic situation of voters or on the economy as a whole. Those saying it is very or quite likely that they would be personally better off under independence were nine times as likely to say they will vote yes after allowing for other factors. By contrast those thinking it likely that the general economic situation in Scotland will be worse were nearly ten times less likely to support independence. Approval of the Scottish Government’s performance was also associated with higher levels of support for ‘Yes’, perhaps for obvious reasons. The large number of Scottish voters who are unsure what will happen under independence are much less likely to vote ‘Yes’, suggesting the fear of the unknown could still play an important part in the final outcome. What is of note to the devolution debate is that the model confirms the importance of the promise of further devolution: even after allowing for all these other factors, those who expect to get less devolution than they would like, and those who want more tax raising powers, are much likely to vote Yes.

So the British Election Study data clearly demonstrates a high level of demand for more devolution, but unfortunately for the Yes campaign, it also shows a large proportion of voters think this will be achieved without independence. With the Yes side still trailing in the polls they will need the support of those who are still undecided. Eight percent of the BES sample said they were very likely to vote in the referendum but hadn’t decided which way. The good news for Alex Salmond is that that this 8% are somewhat less likely than the sample as a whole to expect devolution preferences to be met if Scotland remains in the Union. Whilst the result remains unclear, whatever the outcome, the possibility of a vote for independence is already re-shaping the future powers of the Scottish Parliament.

If Scotland votes to remain part of the United Kingdom, should the Scottish Parliament have more powers than it does at present, fewer powers, or should the Parliament’s powers stay about the same as they are now.

And if Scotland votes to remain part of the United Kingdom, do you think that the powers devolved to the Scottish parliament will change?

[2] Wording for the two questions is provided below.

[3] This means that in 93% of cases the observed voting intention was the same as that predicted by the model.

[4] Order is determined by the standardised regression coefficient.