Guest Blog by Matthew Goodwin and Caitlin Milazzo: Who will stay loyal to UKIP in 2015? 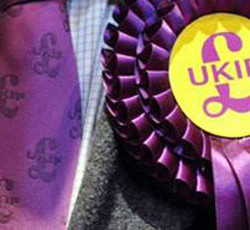 At the 2014 European Parliament elections the UK Independence Party (UKIP) fulfilled its promise to deliver an electoral earthquake. UKIP finished in first place, with 4.3 million votes and 27.5% of the vote. Since the election, attention has quickly turned to the 2015 general election, where UKIP is hopeful that it can take its revolt into Westminster. Yet the party faces a major challenge: how to sustain the loyalty of its supporters. UKIP does have reason to be optimistic. As revealed on this website, data from the latest wave of the British Election Study (collected in February/March 2014) suggests that loyalty to UKIP between the 2014 European Parliament elections and the 2015 general election is likely to be around 60% (a much larger figure than between the last European Parliament and general election in 2009 and 2010 respectively).

What can the BES tell us about these UKIP loyalists? Consistent with earlier research before 2010, the study indicates that UKIP’s loyal supporters are the most disadvantaged; they tend to have no educational qualifications and come from the lowest income groups. In contrast, UKIP supporters who have higher levels of education and resources are the planning to leave UKIP in greater numbers. The data show that 43% of degree holders are planning to defect versus only 25% of those lacking formal qualifications. While the differences are more modest with respect to income, the data nonetheless shows that 47% of UKIPs supporters from the highest income quartile plan to defect, compared with 35% of the supporters from the lowest income quartile. The following figures compare intentions to stay loyal to UKIP (yellow bar) by educational qualifications and also by income quartile.

However, the BES data also suggests some interesting patterns with regards to UKIP’s loyalists. First, supporters who are concerned about immigration are more likely to stay loyal; 73% of the loyalists who find immigration to be the most important problem facing Britain today. In contrast, only 49% of the UKIP supporters who are more concerned about the economy reported that they planned to stay loyal to the party in a general election. Second, while fewer women supported UKIP in the European elections, the figure below shows that UKIP’s female voters tend to be more loyal; 26% of men supported the party vs. 20% of women. However, among UKIP’s female supporters, 68% indicate that they plan to stay loyal in 2015, compared with only 60% of UKIP’s male supporters. This could be due to the fact that women appear to be more concerned about immigration. If we look across all respondents, women are more likely to say that immigration is the most important problem, while men tend to refer to the economy. These gender differences become even more pronounced if we look at only those respondents who indicated they were going to support UKIP in the European election.

Finally, while we often hear about Farage’s southern strongholds, it is UKIP supporters in the North East and North West who express the greatest loyalty to his party; in both of these two northern regions, 70% of UKIP supporters indicate that they will hold with the party in a general election.

While a lot could change over the next year, these BES data offer interesting insights into where all parties should be looking in the coming months. Women, in particular, promise to be an important battleground for British parties. Moreover, the data suggests that UKIP’s core base of disadvantaged voters who are particularly animated over immigration will be central to the party’s 2015 campaign, while the main parties might be able to win back the less committed UKIP voters by pitching to their concerns over the economy. Yet another message also appears to be coming through: the longer that immigration remains a highly salient issue in British politics, the better the chance Farage has to cause an upset next year.