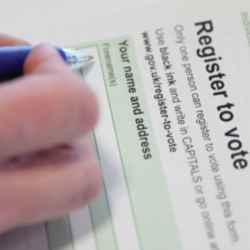 In 2014 Individual Electoral Registration (IER) was introduced in England, Scotland and Wales. IER requires voters to register individually and provide individual identifying information, such as their date of birth and national insurance number. It replaced the previous system of ‘Household Electoral Registration’ (HER), whereby one person in every household was responsible for registering everyone else who lived at that address and no additional identifying information was required. Importantly, the new system allowed for voters to register online.

In 2018 the BES team produced a report “Assessing the Impact of Individual Electoral Registration using the British Election Study” co-authored by Jessica Smith (University of Southampton) and in collaboration with the Electoral Commission. The report is now publicly available for the first time. The report draws on data from the British Election Study internet panel and face-to-face survey data in conjunction with electoral registration records to examine who was registered to vote during the transition period and how people feel about the registration process. Specifically, the questions asked in this report are:

Figure 1 also shows differences in age groups in terms of who joins the register with the youngest age groups also being the most likely to join, especially in the transition period. However, in both absolute and relative terms younger people were more likely to drop–off than to join following the finalisation of the IER registers in December 2015. Overall we see greater volatility in registration in these age groups, with voters more likely to drop on and off the register.

We cannot say for sure whether the pattern we observe of people dropping off the register between elections but registering in-time for elections is a feature of the 2014-2017 period, or is something we are likely to continue to observe in the future. If this pattern persists it is both good and bad news for British democracy. On the one hand, it is good news that IER has not negatively impacted registration levels at the time of elections – electoral participation does not seem to have been affected. On the other hand however, electoral registers serve important roles between elections as well – such as being used to redraw constituency boundaries. If registers are incomplete then decisions that arise from them such as constituency boundaries will be badly informed.