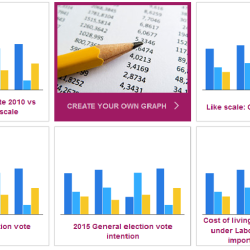 The British Election Study has now made its data collected in 2014 available to anyone who wants to know what the nation thinks about politics. Called the Data Playground, the politically interested can now get their hands on BES data, for free, without the need for specialist software. Just visit www.britishelectionstudy.com/data and select the Data Playground tab.

Investigate areas as diverse as how citizens engage with politicians during election campaigns to what we feel about our political parties and their leaders. There are also sections on attitudes to policies, public spending, the European Union, immigration and other issues discussed widely in the media. The demographic details of the people who take part in the surveys such as their age, religion and even the newspapers they read are also available.

The University of Manchester’s Professor Jane Green, a co-Director of BES, said: “Because there are so many new questions facing the British electorate, there’s never been a more important time to have an election study in the UK. The public are grappling with coalition politics, concerns over immigration, the economy and the rise of UKIP. It’s a complex mix of issues, which BES data can help to unpick.

“The Data Playground, for the first time in BES’s history, allows anyone to examine large parts of BES’s topical and recent data without the need for specialist expertise or software. It is part of our mission to provide balanced and impartial information about electoral politics, away from the lens of the political parties. As academics, we feel it is important to make our research accessible and relevant to the wider community and our belief is that this is a powerful way to do that.”