Between a Rock and a Hard Place: Is any Brexit Deal Possible and Popular?

The current withdrawal agreement agreed by Theresa May – the deal that is currently the only one on offer from the EU – is very unpopular. Unsurprisingly, only 5% of Remainers consider it to be a good or very good deal (in newly released BES data, wave 15, from March 2019). However, it is barely more popular among Leavers, only 9% of whom think the deal is good or very good.

Some commentators have suggested that the deal’s unpopularity among Leavers may stem from the fact that these voters do not have a good sense of the constraints that the government is working under. On this view, if voters realized that the space of possible deals is very narrow, they would see that the government’s deal was just about the best possible deal available and would support it.

In this blog, I show that opposition to May’s deal among Leavers can’t be explained by ignorance of the constraints in negotiating. The vast majority of voters on both sides of the referendum debate have only a loose understanding of what deals might be possible. However, those Leave voters that do understand the constraints are not more sympathetic to the deal May negotiated. Instead, they mostly want to either make concessions on Northern Ireland or exit without any deal at all.

Defining the deals that could ever have been possible is difficult, and any claims will be hotly contested. Nonetheless, we identified four things that might be possible under different deals but which many have seen as being incompatible:

I have listed the reasoning for these codings at the end of this post. All of these codings are arguable of course, and a deal that would appear to be impossible may yet be agreed. 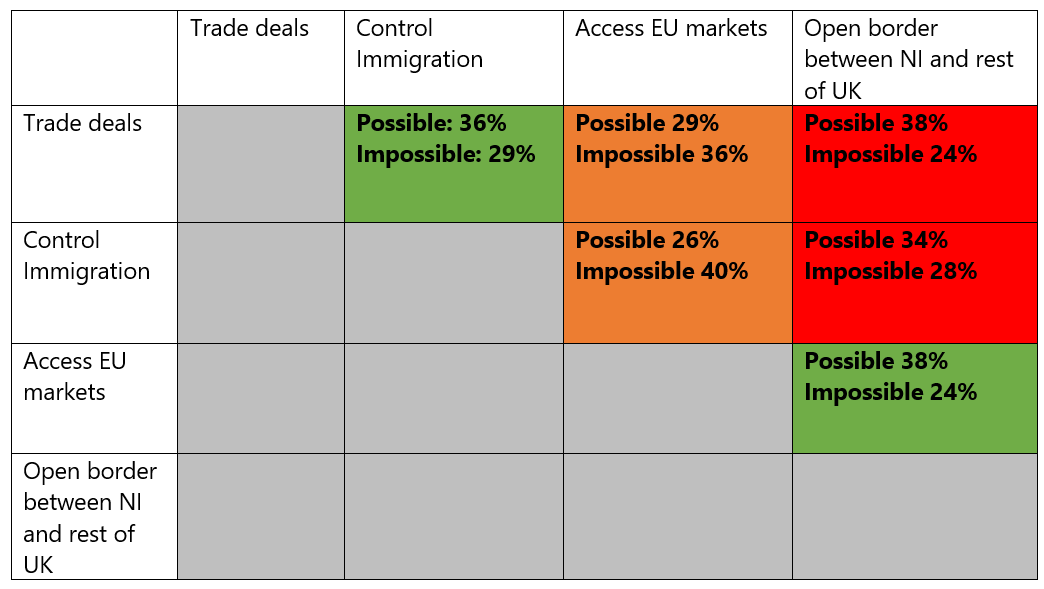 Realistic perceptions of the constraints on negotiation are not that different across the referendum divide. 23% of Remainers identified the two clear constraints along with 18% of Leavers.

While the 21% of respondents may not be perceiving the deal making space completely realistically, they are the only ones who perceive the hard constraints that deal making is happening under.

Are these realistic respondents more sympathetic towards May’s deal? No, in fact they are far more negative. 70% of Leave voters who identified the constraints said that May’s deal was bad or very bad, compared with only 38% of those who did not identify the constraints.

So, if these Leave voters think that May probably couldn’t have negotiated a better deal and still don’t like it, what do they want? We asked respondents which aspects of a Brexit deal they saw as most important. The following table shows the percentage who said a particular aspect was “extremely important” on a 5 point scale among “realistic” Leavers and Remainers as well as all Leavers and Remainers:

Leavers put high importance on making trade deals, controlling immigration and not having to follow EU regulations. However, many Leavers put much lower emphasis on keeping open borders between Northern Ireland and either Britain or the rest of Ireland. A deal that carved out a separate Customs Union for Northern Ireland might well be acceptable to these voters. However, such a deal is not acceptable to the Democratic Unionist Party who are propping up the Conservative government, so the prospects for such a deal passing look dim.

Given all of these results, it is perhaps not surprising that the realistic Leavers instead want to leave without a deal. 87% prefer leaving with no deal to taking May’s deal (compared with 70% of other Leavers). More knowledge is not leading to moderation around Brexit.

Voters mostly do not have a deep understanding of what deals are possible but that lack of understanding is not what has made May’s deal so unpopular.

Rating whether the combinations are possible

The first combination is the ability for Britain to strike its own trade deals and control EU immigration. I rated this as possible, as it can be achieved by leaving the Customs Union and Single Market (as May’s deal does).

The third combination is allowing Britain to makes its own trade deals and keeping an open border between Northern Ireland and the rest of the UK. I rated this as not possible, because the EU will not agree to a deal that puts a hard border between Northern Ireland and Ireland. Any deal would then either necessitate some form of border between Northern Ireland and the rest of the UK (so that goods and people could move freely over the Irish border but not into the rest of Britain) or keep Britain in the Customs Union, which would rule out making separate trade deals. This combination is not uncontested either. The Malthouse Compromise claims to be able to avoid this trade-off using technology, but the EU has called this unrealistic and has said that the backstop is not negotiable.

The final combination is freely accessing EU markets and keeping an open border between Northern Ireland and the rest of the UK. We rate this as possible, because it would be relatively easy to achieve by staying in the Single Market and probably by just staying in the Customs Union.