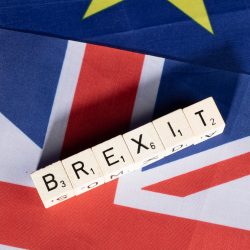 There are four lessons we draw from our analysis:

1. If anyone can challenge Nigel Farage for Brexit Party voters, it is Boris Johnson

Using the 2019 post-EP elections data (wave 16 of the BESIP), we look at the likelihood of voting for the Brexit Party in those elections by ratings of different leaders. Boris Johnson was not yet Conservative Prime Minister, and his ratings (on a 0-10 scale) are taken from the earlier wave of the BES, wave 15 (March 2019). This shows that even before Boris Johnson became Prime Minister, he was far more popular than Theresa May among these voters, and almost equally liked as Nigel Farage – their actual, and very popular, leader. 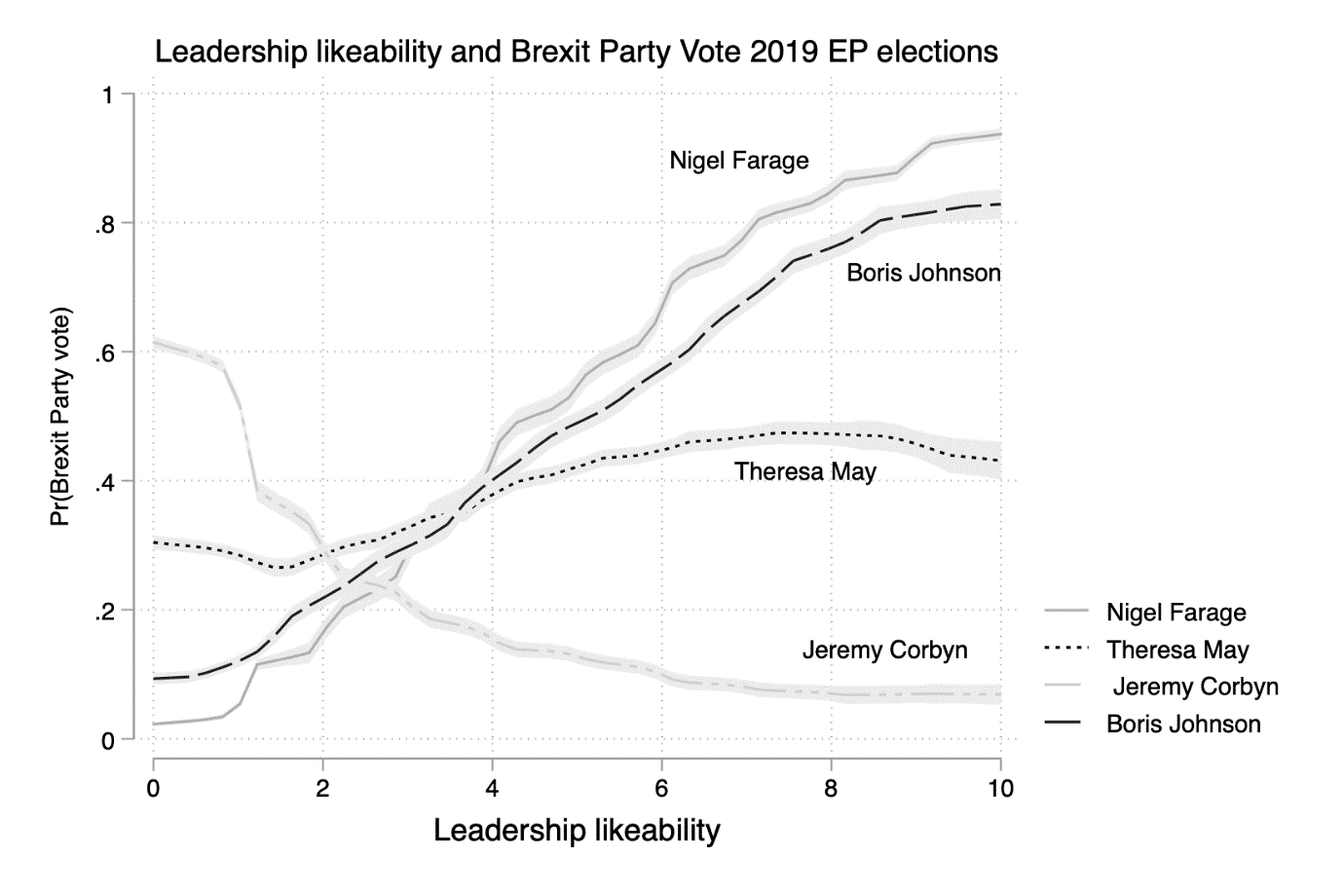 Given that leadership mattered substantially for UKIP voting (Evans and Mellon 2015) , it seems likely that the loyalty of Brexit Party supporters might be severely tested in a general election where Boris Johnson is leading the Conservatives. However, a challenge between Nigel Farage and Boris Johnson for Brexit Party voters is impossible to call. Both leaders might have similar sway and ability to persuade these voters, depending on their willingness to accept the Brexit extension and Boris Johnson’s Withdrawal Agreement Deal.

Of course, Boris’s hard-line approach to the EU may put off more moderate Conservatives who supported Theresa May. Although Johnson was liked far more by European Parliament Brexit Party voters than May, he was disliked more by those who voted for the Conservative party in the European Parliament elections: Johnson received only an average 4.4 rating from Conservative voters compared to May’s score of 6.9.

2. Brexit Party and UKIP voters are extremely similar in their demographics

Who are these voters that both leaders need to appeal to in the coming weeks? 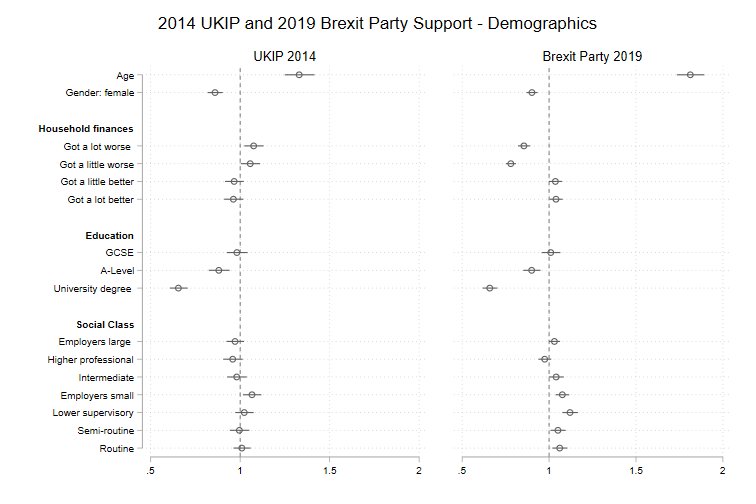 The general pattern is one of similarity between the socio-demographic bases of support for the two parties. Age and education dominate with support for both parties being drawn from older and less educated groups, but the effect of age on support for the Brexit Party is stronger than its effect on support for UKIP. We also see the commonly observed propensity for men to be more supportive than women of radical political parties. A similar shared appeal is seen among ‘small employers & the self-employed’ – a long-established heartland for the radical right. There are some differences however: the lower supervisory class is pro-Brexit Party, but not pro-UKIP. Interestingly, although there are modest negative effects of recent economic experiences on UKIP support there are positive coefficients for the Brexit Party. [This differs slightly if we use the pre-EP election waves: the effects of economic retrospection on UKIP vote are no longer significant. We still see that those who are more negative about their finances are less likely to vote for the Brexit Party.]

While the demographic basis of UKIP and Brexit Party support has changed somewhat, we also need to know what motivates these voters in their support for both parties.

Figure 3 shows the results of regression models of UKIP and Brexit Party support on voters’ attitudes and perceptions. These include English nationalism, disapproval of immigration, attitudes towards redistribution, EU attitudes, leader evaluations and dissatisfaction with democracy. These capture the typical range of concerns and motivations associated with radical right party voting, including the extent to which support for the radical right reflects a general frustration with politics, a commonly cited reason for radical right protest votes. 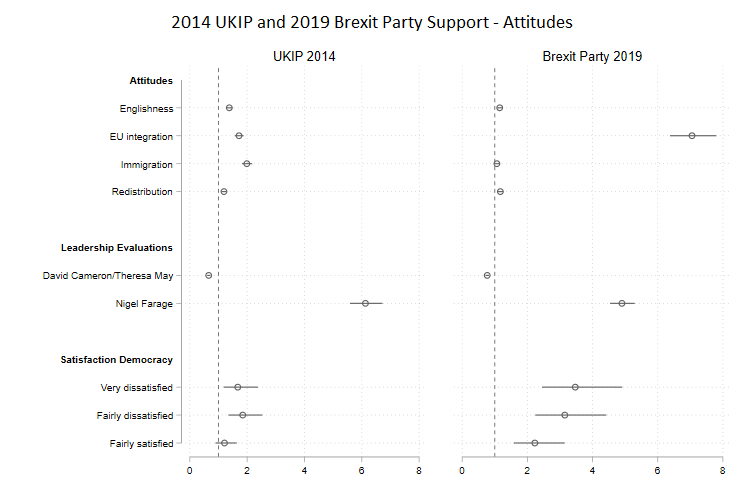 There are clear differences in the relationships of attitudes and vote choice across the two elections. Brexit Party votes in 2019 were far more associated with Euroscepticism than UKIP votes in 2014, and less associated with concerns over immigration. Dissatisfaction with the democratic process increases substantially in its effect. The reasons for these changes are likely to be that (i) Brexit has structured vote choice more in this period; (ii) immigration has declined in salience as EU immigration has declined in reality, and (iii) the failure of the government to progress to any exit, of whatever form, from the EU has left a heightened sense of frustration with the workings of parliament.

There is, then, an attitudinal difference between UKIP and Brexit Party support, notwithstanding their similar demographic base.

4. These are many of the same voters

The unique inter-European Parliament elections panel design of the BESIP allows us to look at the flow of vote for the same survey respondents between the two European Parliament elections. We can, of course, only do this for people who were in both waves of the panel; in 2014 and 2019, and so this does not include new entrants and defectors in 2019. It shows us that – to a large degree – Nigel Farage was winning the same voters in 2019 as he was in 2014; simply translating their support from UKIP to the Brexit Party. 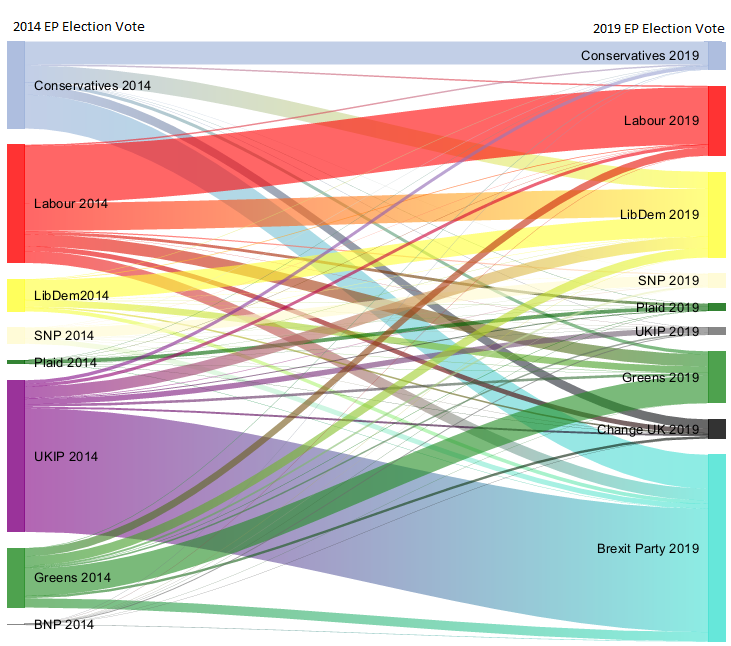 Included are BES internet panel respondents with a recorded vote choice in both the 2014 and 2019 European Elections. Data is weighted, ‘don’t know’ responses excluded. N = 4,998 respondents.

No other political party had retention and recruitment rates approaching the level attained by UKIP/The Brexit Party across the 5-year period between the two EP elections.