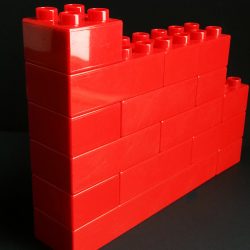 Class has been front and centre in the 2019 general election. Not as in the 1960s when, as Peter Pulzer asserted, it was ‘the basis of British party politics; all else is embellishment and detail’, but for the very different reason that Labour’s hold on its working class ‘red wall’ of seats across the midlands and the North became the primary battleground targeted, with considerable success, by the Conservatives.

In this blog we show how this realignment of the traditional axis of class voting happened over a relatively short period between 2015 and 2019, though the seeds of this realignment were sown some decades ago when ‘New Labour’ was re-positioned as a catch-all party minimizing its ties with trade unions and the working class. Since then, working class voters have increasingly chosen not to vote at all, or have defected to the Conservatives, the Liberal Democrats and, eventually, UKIP. As we showed in a previous BES blog, by 2015 UKIP was the most working class party in Britain.

Labour’s weakened hold on its working class base by the time of the 2015 election can be seen in Figure 1. Here we distinguish between four classes: a professional & managerial ‘middle class’, a routine white collar ‘intermediate class’, a self-employed or small business ‘own account’ class; and a ‘working class’ composed of semi-routine, routine and supervisory workers. In 2015 the gap between being middle class or working class and voting Labour or Conservative was, by historic standards, a modest 18 points. By 2017, however, even this gap had essentially disappeared. The Conservatives now had a lead of 9 percentage points among working class voters. By 2019, that lead was up to 21 points, while its lead among the middle class remained constant at 10 points. The historic relationship between being working class and voting Labour, and being middle class and voting Conservative, had reversed in less than five years. The other classes (the routine non-manual workers and the self-employed) maintained a constant relative advantage for the Conservatives over this period, although the self-employed became even more clearly the core of the Conservatives’ class base, with the Conservatives’ lead over Labour rising from just under 20 points in 2015 to just over 30 points by 2019. 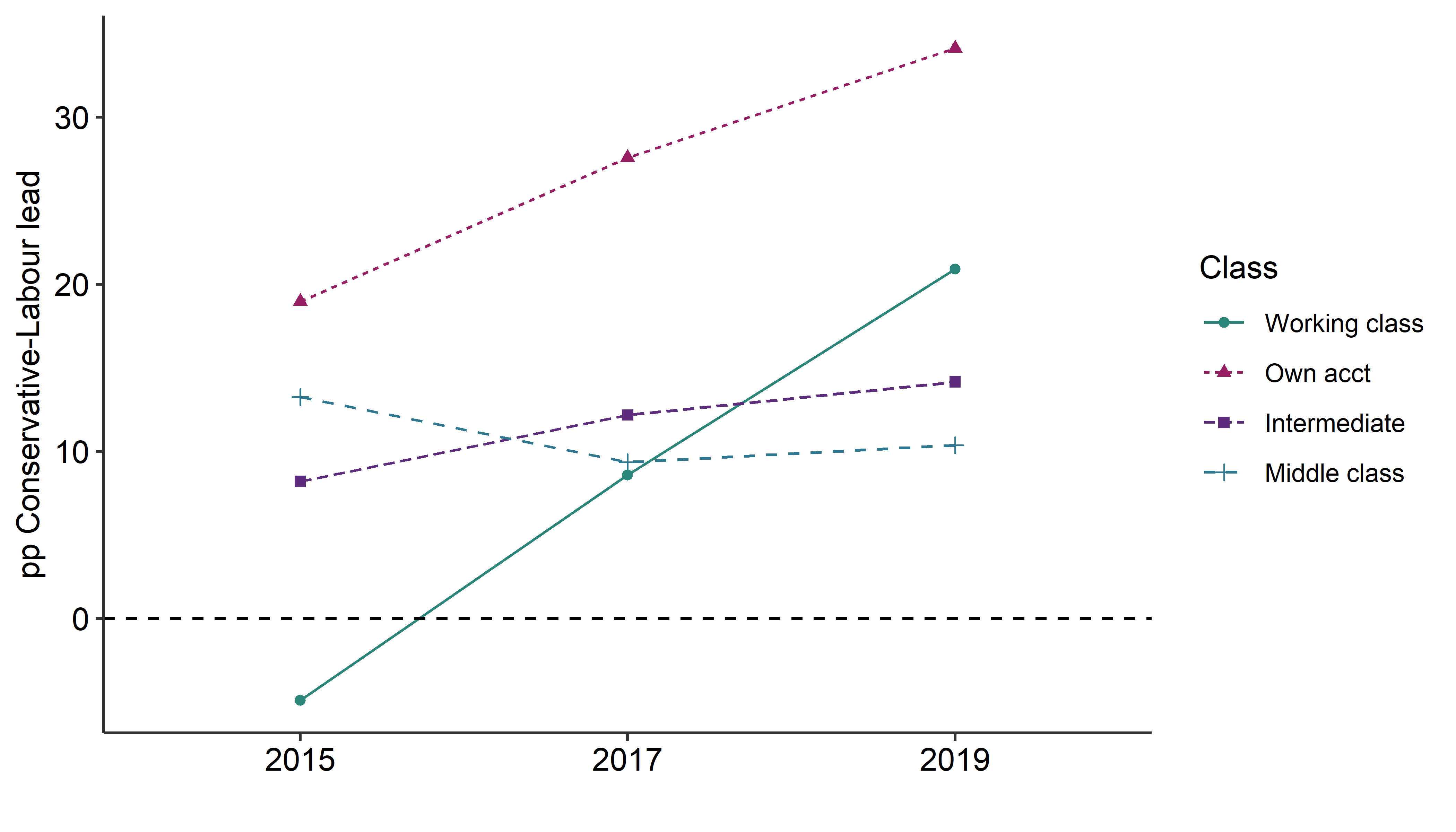 The source of this class realignment lies primarily in the growing appeal of the Conservatives to the working class – middle class support for the Conservatives did not increase during this period. By 2017, UKIP had more or less been eradicated electorally and their supporters, many of them working class, had shifted to the Conservatives led by Theresa May with her oft-repeated mantra of ‘Brexit means Brexit’. This strategy was continued with even more success in 2019, when a popular and populist Boris Johnson lead the Conservative Party campaign with the motto of ‘Let’s Get Brexit done’. 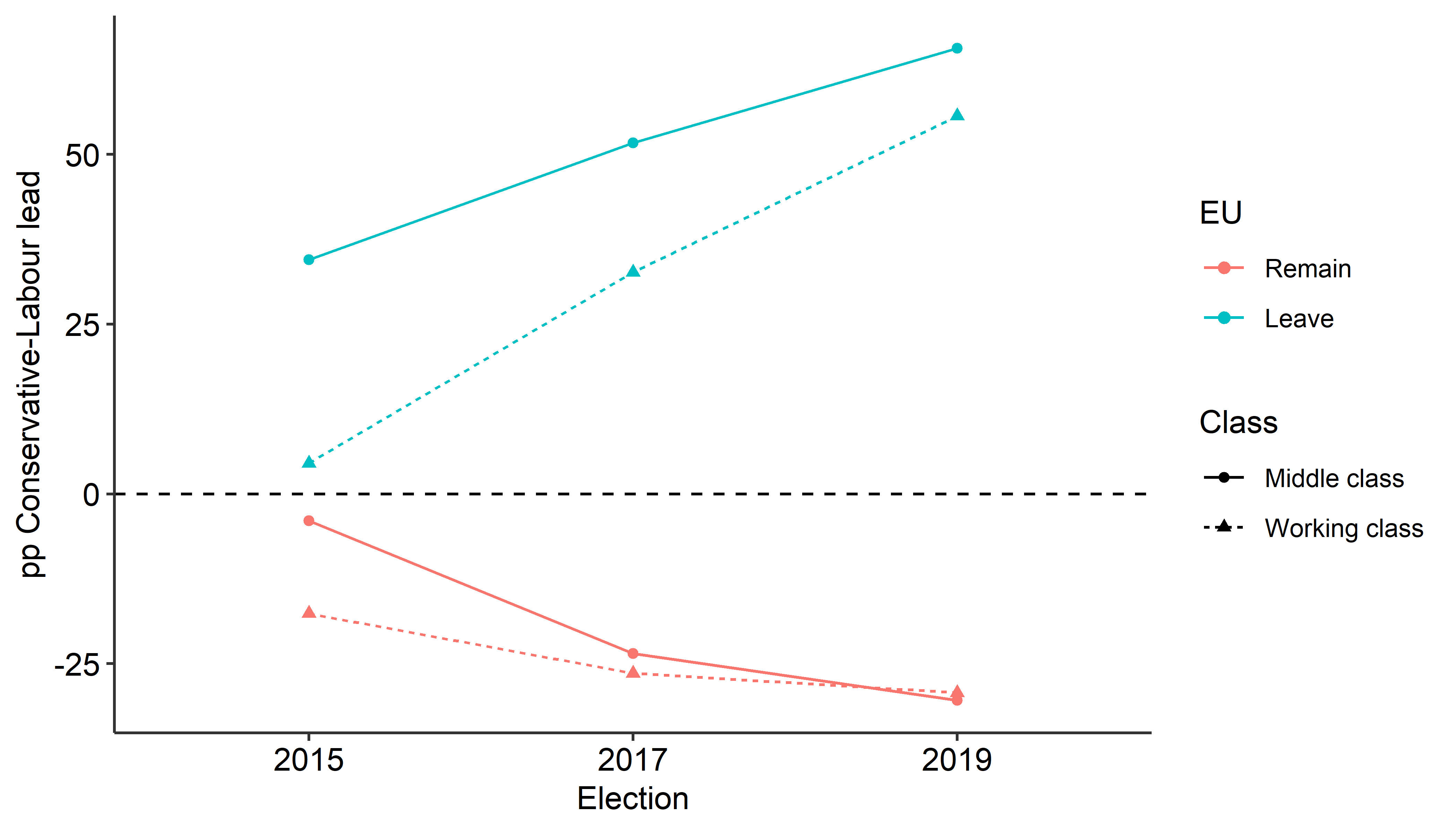 We can therefore see why the Conservatives have become the party of the working class and even more strongly (as it has always been) the self-employed. These are the classes where Brexit is most strongly supported. Figure 3 shows a more than 30 point pro-Brexit lead in the working class. The self-employed are almost as clear in their preference.  The middle class sways, though less strongly, in the other direction. 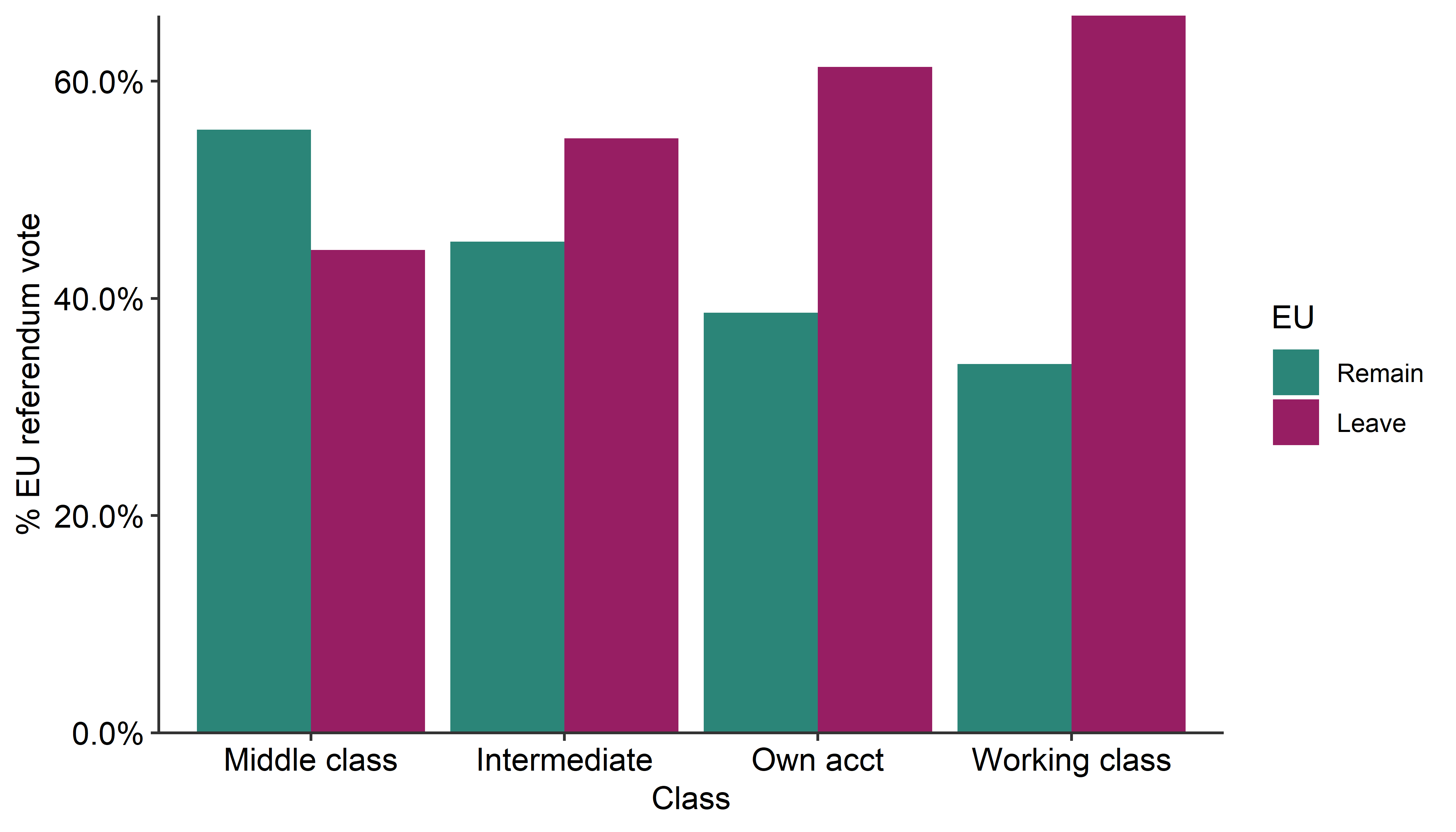 Brexit has not only shaped the class alignment between Labour and the Conservatives, however. It lies behind a broader realignment between Leave/Remain votes and class-based political choices on the left and the right of politics. Both Theresa May and Boris Johnson have sought to undermine support for parties that outflanked them on questions of Europe and immigration, their success in doing to has helped to redine what ‘left’ and ‘right’ mean in British politics. The Conservatives and UKIP/the Brexit Party represent one pole of this divide that appeals to social conversatism. The other, socially liberal, pole is occupied in various ways by Labour, the liberal-Demcorats and the Greens. The class basis of this new left-right divide is shown in Figure 4. Once again the self-employed occupy the right-wing, but in 2019 were joined by the working class. At the same time, the middle class and intermediate routine non-manual workers moved away to the new left. 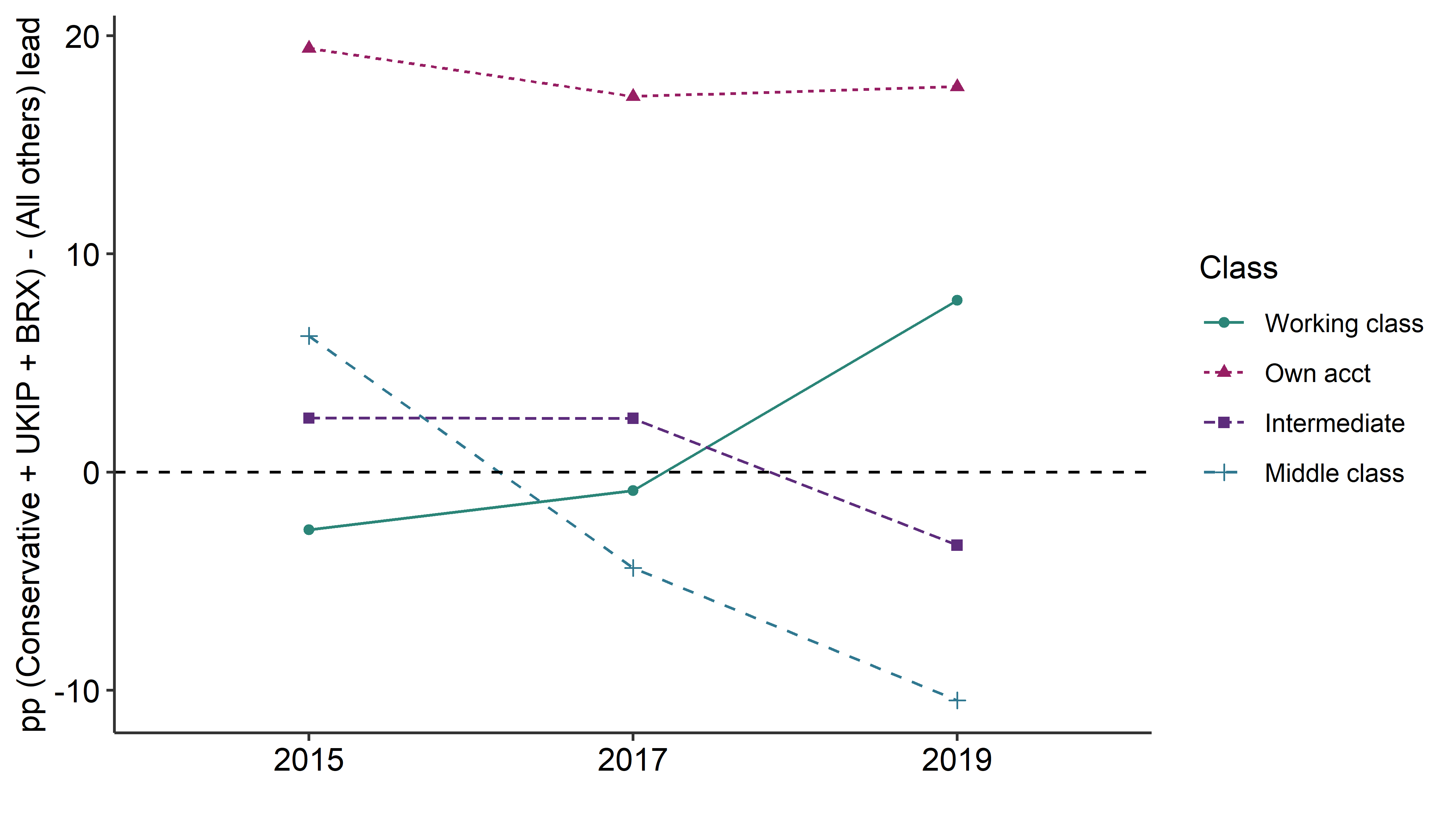 British class politics is not disappearing, it is realigning.  Owners and workers on one side, the professional, managerial and administrative middle classes on the other. Given the volatility we have seen in recent years when voters respond to party signals and electoral shocks it would be unwise to assume this new pattern is fixed. But the British picture has echoes of similar realignments in European states where radical right politics has increasingly appealed to the workers and the small business and self-employed classes. Unlike these states which have, predominantly, proportional representation, the majoritarian electoral system in Britain leads to established parties providing the primary representation for new political movements. The radical right is therefore being incorporated into and re-shaping mainstream competition.