Women, men, and the 2017 general election. By Jane Green and Chris Prosser 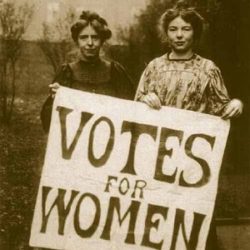 With the forthcoming centenary of the Representation of the People’s Act 1918, it is timely to ask whether women are equally engaged in voting, whether they vote differently to men, and how this might have played out in the most recent general election in June 2017.

It is often thought that women turn out to vote in lower numbers than men because pre-election surveys consistently show that women are less decided in their vote choice. But the belief that women’s turnout in British elections is lower has been shown to be untrue in the past, and the same was the case in 2017.

The results of the BES ‘vote validated’ turnout figures for 2017 by gender show that women are just as likely to turn out to vote as men – which was also the case in 2015 – as the chart below shows. Note that the small difference between genders in each year is well within a normal error margin in surveys, making these figures effectively equivalent. 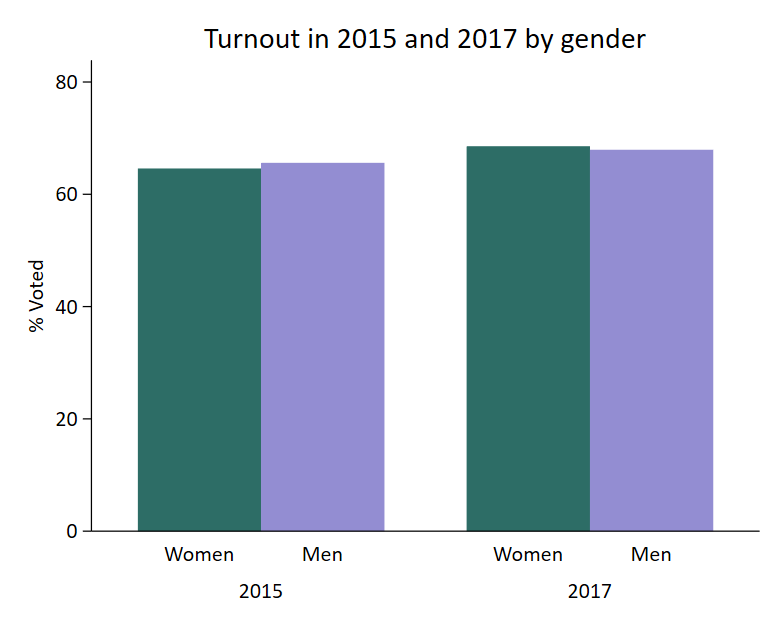 One hundred years on from legislation giving the first women (over 30 years of age) the vote, women are now equally engaged in the process of turning out to vote in general elections.

We know that the gender gap in vote choice (the difference in support for political parties between men and women) varies by election, as different parties make appeals to different genders and age cohorts of voters, as shown by Rosie Shorrocks, here.

By 2017, the gender gap in Conservative vote choice narrowed slightly but flipped; with more men voting Conservative than women. There was a bigger gap in 2017 between men and women in their support for Labour – with women voting Labour in greater numbers than men. The following graph shows the reported vote choice for BES respondents in the 2015 and 2017 BES face to face surveys: 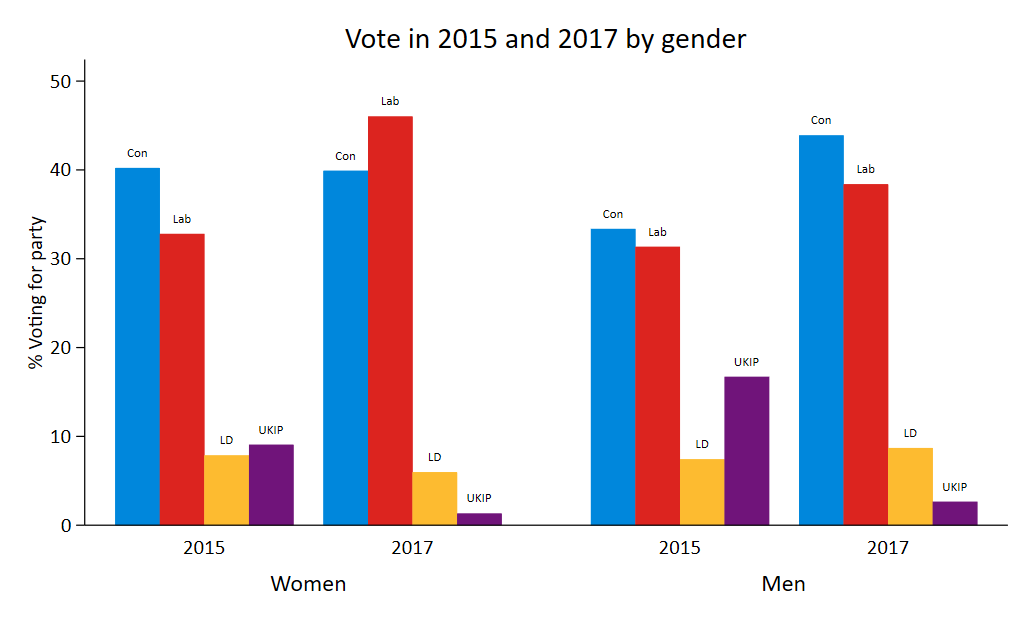 Why did Labour perform well among women?

Part of the explanation for Labour’s 2017 success among women lies in the effect of the election campaign, which made a significant difference to Labour’s fortunes, confounding the assumption that campaigns don’t usually matter to net aggregate-vote shares. As mentioned above, women are more likely to express that they are undecided in their vote choice before elections. This was also the case prior to the 2017 general election. 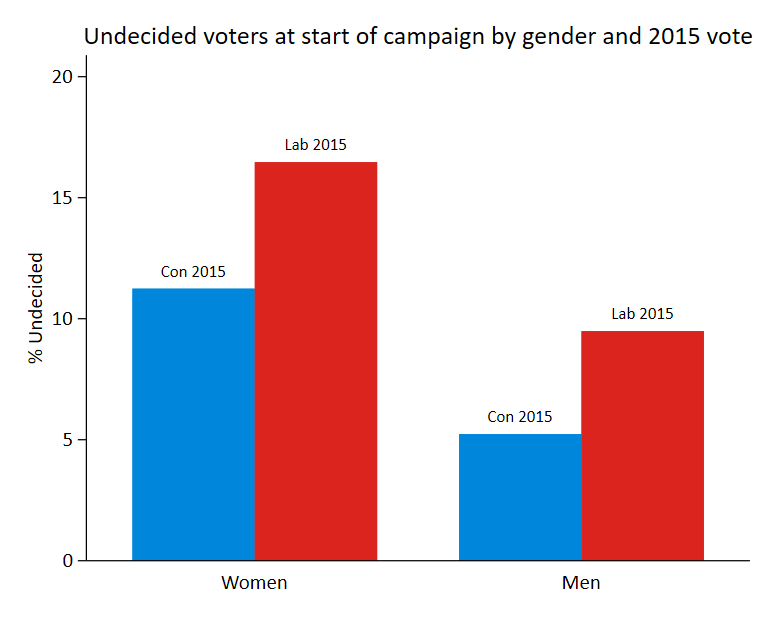 Despite (or perhaps because) of the fact that Labour had ‘lost’ more votes to ‘don’t know’ at the start of the campaign, Labour was especially successful in winning the support of undecided voters during the 2017 election campaign, as we show in this paper.

As a result, Labour did better among women during the election campaign.

The rate of switching from don’t know to Labour during the campaign (between waves 11 and 13 of the BES) was almost equivalent for men and for women, as the chart below shows. 52% of men who said they were uncertain about how to vote in wave 11 reported voting Labour in wave 13 (the post-election wave), whereas 54% did so among women. However, the women represented the larger proportion of Labour gains (or Labour retained votes from 2015) from previously undecided voters before the campaign, because there were more undecided women to begin with. The sum total of Labour’s gains from undecided voters in wave 11 resulted in roughly two-thirds coming from women. 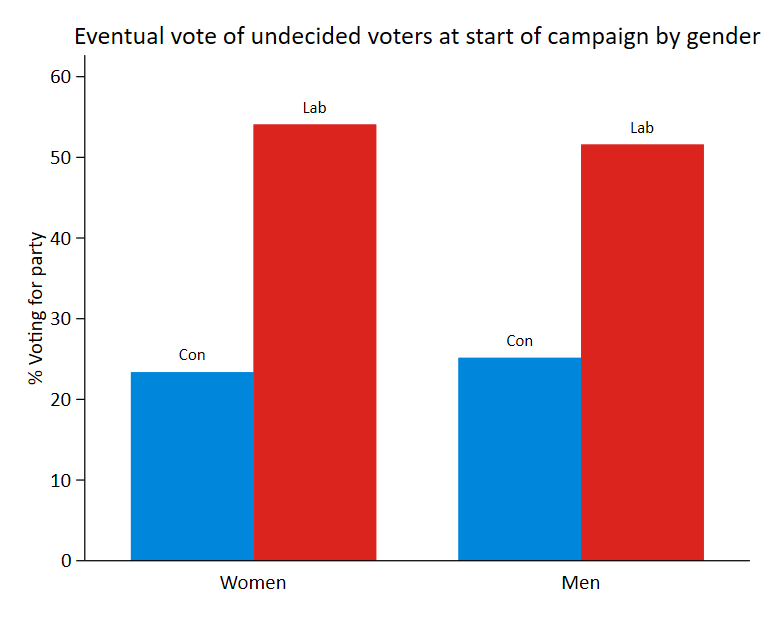 Why did the Conservatives perform well among men?

The Conservative success among men was in part a result of UKIP’s collapse between 2015 and 2017, which particularly affected Conservative support among older men. Of all switching from UKIP to the Conservatives between wave 6 and wave 13 of the BES internet panel, roughly 60% of these lost votes were from men.

The following figures show the predicted probability of voting for the Conservatives for BES respondents of different ages by gender (women signified by the dashed line, men by the solid line), using the BES post-election face to face surveys in 2015 and 2017.

Where the confidence intervals (shaded) overlap this indicates where the differences between men and women are not statistically significant using the BES face-to-face validated vote samples. 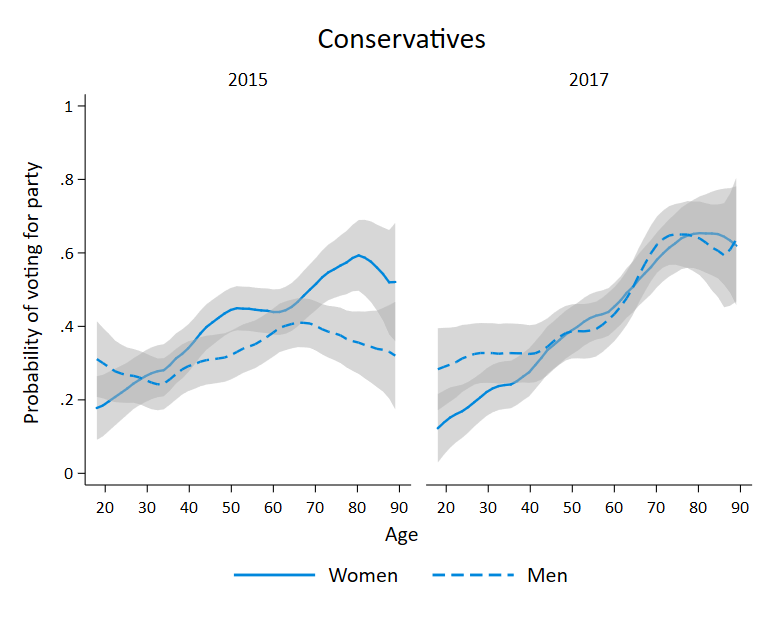 There is some indication that the Conservatives lost a greater proportion of younger female voters in 2017, but retained a roughly equivalent proportion between elections of younger men.

The equivalent graphs for voting Labour show Labour’s gains among both genders and the stronger age and vote relationship between 2015 and 2017 than a clear gender divide. There is again an indication that younger women were more likely to vote Labour, although the overlapping confidence intervals mean we cannot be sure of the magnitude and significance of a difference. 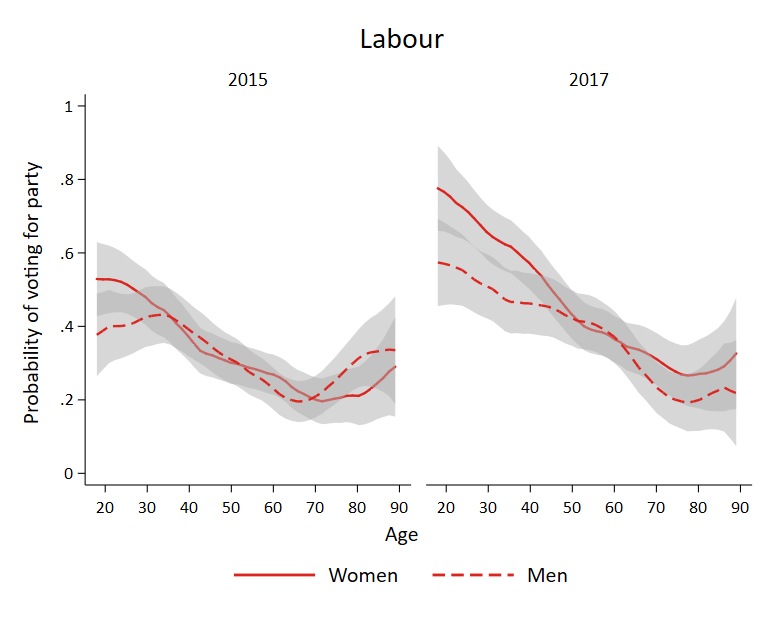 What is most clear from these analyses, which is already becoming a well-known fact about the 2017 general election, is that the demographic divide that most differentiated British voters in 2017 was one based on age. However, gender is a part of that story: as older men moved from UKIP to the Conservatives, this contributed to the older age basis of the 2017 Conservative vote. There may well be other reasons why the Conservatives were more attractive to older male voters in 2017, and exploring this possibility will be an interesting question for future analysis. An equally intriguing part of the puzzle is why younger women may have switched in higher numbers to Labour in 2017. Our analysis of undecided voters above is largely about the retention of Labour voters between 2015 and 2017. While the major story in 2017 is the age basis of vote choice and why this happened, gender will be an important and interesting part of the underlying explanation.

Note an earlier version of the 2015 and 2017 vote bar chart incorrectly plotted the votes as a percentage of the parties displayed in the graph rather than a percentage of all parties.