The British Election Study are delighted to announce that A tale of two peoples: motivated reasoning in the aftermath of the Brexit Vote by Miriam Sorace and Sara Hobolt (published in Political Science Research & Methods) is the winner of the inaugural British Election Study best article prize. They will receive a £500 prize generously donated by Ipsos MORI and YouGov.

The panel also gave an honorable mention to Who Votes More Strategically by Andrew Eggers and Nick Vivyan published in the American Political Science Review.

Sorace and Hobolt use British Election Study internet panel data to examine how the Brexit referendum led to biased economic perceptions for Leavers and Remainers. Prior to the referendum, on average there was no difference in Leavers and Remainers’ evaluations of the economy. However, after the referendum Leavers became far more positive about the economy, while Remainers became far more negative. 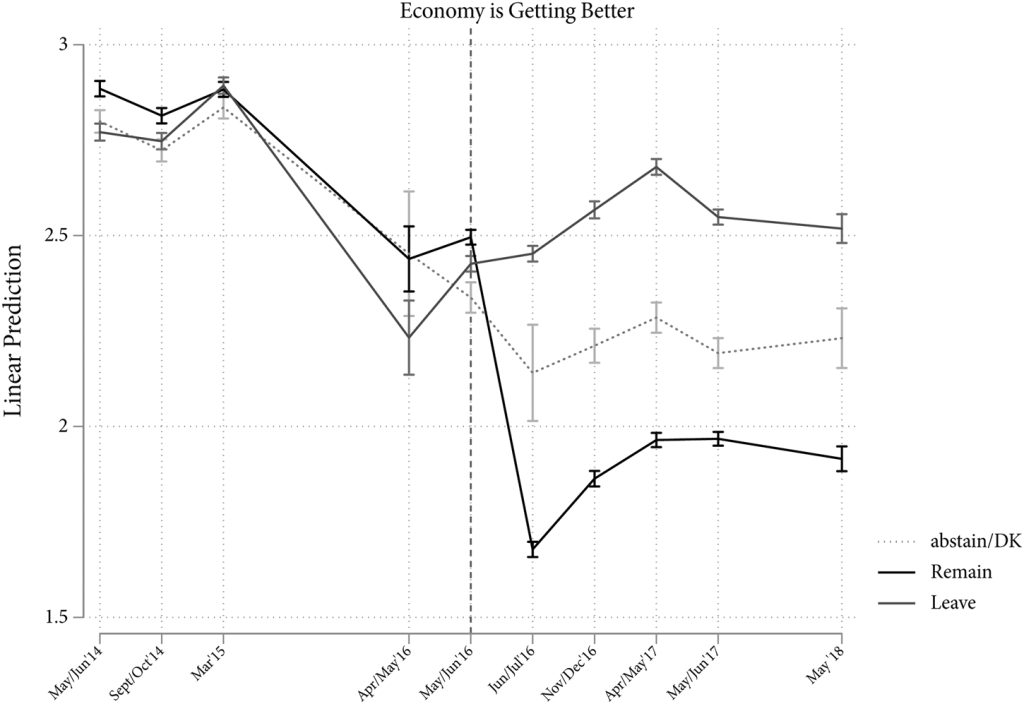 While this pattern has previously been documented for supporters and opponents of incumbent governments, Sorace and Hobolt convincingly show that the EU referendum was able to create a sustained difference in economic perceptions, showing that other political divides can shape political perceptions just as much as partisanship.

The prize panel praised Sorace and Hobolt’s work for its clear relevance to important debates in British public life around Brexit and the societal divides it has created, while also speaking to important debates within academic political science about how voters form perceptions and opinions about the political world.

The panel also praised the piece for its careful use of the British Election Study Internet Panel data – showing how differences in economic perceptions emerged in the wake of the referendum – as well as the cross-validation of the results using a survey experiment. This triangulation across different analysis strategies further increased the panel’s confidence in the paper’s findings.

The panel were also extremely impressed by Eggers and Vivyan’s work estimating the extent to which British voters behave strategically and whether differences in strategic behaviour could exacerbate inequality. The article develops a new state of the art method for measuring strategic responsiveness and tests this method on data from the British Election Study Internet Panel and shows that previous approaches to measuring strategic voting have undercounted the number of voters who behave strategically.