The Ebb and Flow: How the flow-of-the-vote adds up to a Liberal Democrat collapse in May 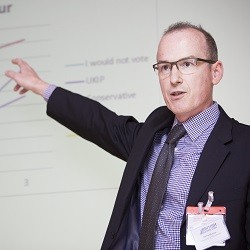 Most political commentators agree on one thing about the forthcoming General Election: it is too close to call. A conference on forecasting the 2015 British General Election, held at the London School of Economics today reveals that twelve forecasting teams (including the BES) all predict that no single party will win an overall majority of seats. Preliminary data from the fourth wave of the BES panel puts the two major parties almost neck and neck, Labour’s lead having narrowed from seven points in March 2014 to only two points in March 2015 (see Figure 1). UKIP support has declined moderately from 16.5% in September (wave 3) to just under 13%. Lib Dem support remains stubbornly low at 7.5%, though this improves moderately to 9.2% when we use the alternative vote intention question as employed by Lord Ashcroft polls[1].

Ashcroft question: Thinking specifically about your own PARLIAMENTARY constituency at the next General Election and the candidates who are likely to stand FOR ELECTION TO WESTMINSTER there, which party’s candidate do you think you will vote for in your own constituency?

Like the opinion polls, we find a fairly stable situation on the surface over the last year, but this conceals a great deal of flux underneath the surface. One of the great advantages of a panel survey is that by tracking the same voters over time we are able to see their individual shifts in support or, as we call it, the flow-of-the-vote. Looking at the flows since the last election and over the period of the BES panel we are able to see some revealing trends. Firstly, Figure 2 shows the 2010 votes of panel members by their current voting intention.

Figure 2. Where they came from: 2010 vote of current supporters

The chart shows how, as you might expect, that the current supporters of the two major parties predominantly voted for those parties in 2010. However, we also see that the Greens, Labour and UKIP all pull in a substantial number proportion of their current vote from ex-Lib Dem voters. Indeed for the Greens ex-Lib Dems make up nearly 60% of their current support, compared to one fifth of Labour and UKIP’s current support (although in absolute numbers more have moved to Labour). Astonishingly this means that there are more 2010 Liberal Democrats now voting Labour than there are intending to vote Liberal Democrat again in May. The reasons for this are relatively straight-forward, with the U-turn on tuition fees no doubt playing an important part, but perhaps more crucial is the cost of coalition: since their formation in 1988 the Liberal Democrats have, on average, been centre-left voters much closer to Labour than to the Conservatives in terms of their political views. Our data confirms that those who deserted the party since 2010 have a much more negative view of the Conservatives than those who stayed loyal (or the electorate as a whole).

Figure 2 also reveals the overall composition of current UKIP voters. Of particular note is that over 40% voted Tory in 2010 compared to only 12% Labour. It is quite clear that UKIP have damaged the Conservatives far more than Labour, a point made very clearly by my colleagues Geoff Evans and Jon Mellon on this site. The growth in SNP support is mainly at the expense of Labour, the vast majority of whom are Scots who voted ‘Yes’ in the referendum. This flow in particular has changed the political landscape, potentially denying Labour most of its seats in Scotland and consequently an overall majority.

To fully understand the dramatic turnaround in Liberal Democrat fortunes, we can reverse the logic of Figure 2 and look at the current voting intentions according to how respondents voted in 2010 (Figure 3). Here one thing stands out: whilst Labour and the Tories enjoy the loyalty of around three quarters of their 2010 voters (a fairly typical figure over the course of an electoral cycle) Liberal Democrat loyalty is an astonishingly low 23%. This is almost unprecedented for a supposedly major party, and has reduced the Liberal Democrats to a level of support not seen since their formation. Indeed if they do not improve on their current 7.5% of the vote before the General Election it would represent their lowest vote share since 1970 when they won only 6 seats.

Figure 3. What 2010 supporters are intending to do in May

With 6 weeks to go to polling there is still much to play for. Although the amount of net change in party support over the campaign is often quite small, this is only because movement under the surface cancels itself out. Yet this need not be the case, and with many voters still to make up their minds it is perfectly possible that the flow of votes in one direction may not equal the ebb going in the opposite direction. Worryingly for the Liberal Democrats their current supporters are much less certain about how they will vote than those intending to vote Conservative or Labour (with SNP supporters being the most certain). With UKIP and Green supporters also being relatively unsure, some drift back towards the big-two parties remains a distinct possibility. If we look at the flow of the vote since the last BES wave in September we do find that the rate of loyalty for the main parties is especially high at around 90% (even when bearing in mind this is a relatively short period). However, since September, Lib Dem loyalty is also fairly respectable at 80%, although this is hardly much to cheer about when you consider this is the hard-core rump of Liberal support.

There are many more votes flowing from UKIP to the Tories than there are in the reverse (roughly three times as many). Just as UKIP have done most damage to the Tories, the corollary of this is that of all the parties, the Tories have the best potential to steal votes back, as evidenced by the flow since September. In contrast, although as a proportion of their votes the Greens lose a relatively large share to Labour, in absolute numbers there are considerably more votes flowing from Labour to Green than in the opposite direction.

As we approach the election, the headline figures mask sizeable ebbs and flows of support between the political parties with the Liberal Democrats being the big losers of these currents. There is one small crumb of consolation for the Liberal Democrats which is that their incumbent MPs who are standing for re-election may well benefit from a personal vote and other local constituency factors. We saw this above in the difference between the standard vote intention question and the Ashcroft question which invokes local issues and the candidate. If we break down this difference by the winner of the constituency in 2010 we see that the difference in support estimated from the alternative vote-intention questions is greatest in Liberal Democrat seats, where the Ashcroft question gives the Lib Dems ten points higher support than the standard question (Figure 5). It is also worth noting that whilst Lib Dem loyalty since 2010 is abysmally low (23%) it is moderately more respectable at 41% in their own seats using the Ashcroft question. These are crumbs of comfort perhaps for Lib Dem MPs defending their seats, but crumbs at least. According to our seats model this is likely to save no more than around 20 seats for the Lib Dems, with the SNP becoming the 3rd largest party in a hung parliament.

Figure 5. Saved by local factors? The difference in standard and Ashcroft voting intention by 2010 winner

Note. The analyses presented here are based on preliminary data from wave 4 of BESIP, carried out between March 9th and 16th with a sample of 16,629 electors. These findings were presented at the All Party Parliamentary Group for Social Science and Policy on Tuesday 24 March 2015 at the House of Commons.